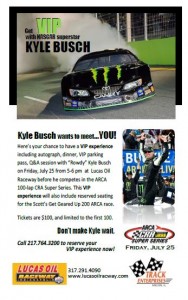 INDIANAPOLIS – Fresh off winning the NASCAR Sprint Cup pole at New Hampshire Motor Speedway over the weekend, Kyle Busch has announced he will compete in the SCOTT Get Geared Up 200 ARCA doubleheader at Lucas Oil Raceway on Friday, July 25. Race fans get a chance to attend a meet and greet reception with Busch prior to the racing action.

This rare opportunity for an up close and personal VIP experience with a NASCAR superstar includes autographs, the Q&A session with Busch at the microphone, dinner, drinks and a general admission ticket to the Scott Get Geared up 200. The VIP package is just $100 per person. Busch will race in the 100-lap CRA Super Series race prior to the 200-lapper in the ARCA Racing Series presented by Menards. A limited number of tickets are available. They include free VIP parking. Please call 217-764-3200 for more information.

Tickets, for $20 – which is $10 off the gate price – are now on sale at Menards stores in Anderson, Avon, Bloomington, Camby, Carmel, Columbus, Fishers, Fort Wayne East, Fort Wayne South, Fort Wayne West, Greenwood, Indy East, Indy South, Kokomo, Lafayette South, Lebanon, Muncie, Richmond, Terre Haute and West Lafayette. Tickets for anyone 11 and under will be $10 at the gate.

The ARCA Racing Series last ran at Lucas Oil Raceway in 2012, with Kimmel taking the checkered flag. The 2014 race will be the 10th ARCA Racing Series race at the track since 1971.The return to the Indianapolis area by the series is important for the series presenting sponsor, Menards. Indianapolis is the fifth-largest market for Menards, which has 287 stores in 14 Midwestern states.

On Thursday, July 24, show cars for the Menards-sponsored No. 27 NASCAR Sprint Cup and No. 88 NASCAR Camping World Truck Series cars will be at the Indy South Menards from noon to 8 p.m. Drivers Paul Menard and Matt Crafton will appear at the store from 7 to 8 p.m. Kimmel and the ARCA No. 44 Ansell-Menards Toyota will be at the Camby Menards from 4 to 5:30 p.m. that same day plus at the Avon Menards from 6:30 to 8 p.m. The No. 27 and No. 88 show cars will be at Lucas Oil Raceway from noon to 9 p.m. on race day, Friday, July 25.

ARCA Racing Series Menards Pole Qualifying presented by Ansell begins at 5:30 p.m. with the ARCA CRA Super Series 100-lap race following at 7. The SCOTT Get Geared Up 200 is scheduled for a 9 p.m. start, and is live on FOX Sports 1. ARCAracing.com will feature live timing and scoring of all ARCA Racing Series on-track activities, starting with the first of two practice sessions at 1:35. All times listed are Eastern. For more ticket information, visit Trackenterprises.com and LucasOilRaceway.com. (NOTE: All times listed are Eastern time.)