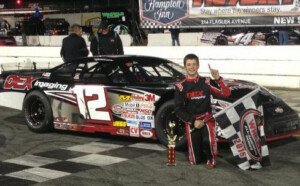 (Nashville, TN. – March 20, 2015) The first of many entries has been filed for the Southern Super Series 100 at the historic Fairgrounds Speedway in Nashville, TN.  The race will run in conjunction with the ARCA 200 on Saturday, April 11.

Track Enterprises, the organization promoting the event, received an entry on Friday morning from the Jeff Burton Autosports owned team for young driver Harrison Burton.  Burton is the first early entry for the return of the Southern Super Series race to the Music City.

The 14-year old driver will be making his second start in the Dex Imaging/Morton Buildings #12 at Fairgrounds Speedway Nashville. His first came last November in the All American 400.  Burton started 29th in that event and brought home a 12th place finish.

Some of Burton’s best success has come at New Smyrna Speedway, in Florida. Harrison, the son of NASCAR competitor turned broadcaster, Jeff Burton, has won a pair of races during World Series competition in each of the last two years.  Burton started his Southern Super Series campaign in the Rattler 250 at South Alabama Speedway on March 15, where he finished 7th.

The April 11 event will be the second race of the year for the Southern Super Series.  33 drivers took the green during the season opener, with Christopher Bell taking the checkered flag at South Alabama Speedway.  Casey Smith, Chase Elliott, Daniel Hemric, and Garrett Jones were top five finishers.

Presale reserved tickets for the event are available by calling Fairgrounds Speedway Nashville at 615-254-1986.  For further information, go to www.trackenterprises.com or www.fairgroundsspeedwaynashville.com. 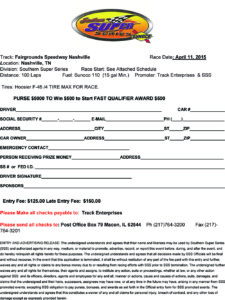