The “Sioux Chief PowerPEX® 200” is scheduled for Friday, July 24. The race will once again be part of a huge weekend of auto racing in the Indianapolis area with a lineup that includes USAC, ARCA and NASCAR.

Sioux Chief Manufacturing has partnered with ARCA Racing Series presenting sponsor Menards to become involved with the series. The business-to-business relationship between Menards and Sioux Chief, a leading rough plumbing manufacturer and supplier of cutting-edge products for plumbing and mechanical contractors, brings opportunities for Sioux Chief to promote their products to the Menards contractor customer base.  PEX is one of the most flexible and easy to use plumbing and radiant heating systems on the market today, and can be used for hot and cold water applications.  PEX tubing is flexible, light weight and can withstand operating temperatures up to 200 F (93 C).

“Sioux Chief is excited to be a part of the ARCA Racing Series presented by Menards,” said Bob Dusselier, Market Research Project Director, Sioux Chief Manufacturing Company Inc. “In many ways Sioux Chief has a lot in common with stock car racing and its fans. We are an American company that is about family, community, quality, history, innovation and more.  It is exciting to be representing our PowerPEX® brand of PEX fitting systems for the race at Lucas Oil raceway.  We look forward to continuing this relationship with Menards and the ARCA Series for years to come.”

The on-track activities at Lucas Oil Raceway, located just outside of the city of Indianapolis, will include 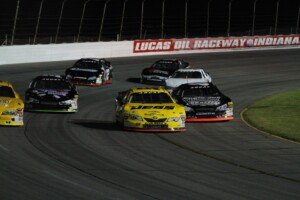 “We are pleased to once again be bringing ARCA back to Lucas Oil Raceway,” said Bob Sargent, whose Track Enterprises promotions company will promote the event. “It should be great for both the fans and drivers, who love the Lucas Oil Raceway oval.”

Series officials are excited about the event also. The ARCA Racing Series has run at Lucas Oil Raceway two of the past three years, and 10 times overall.

“The track has a history of producing great, exciting racing and the ARCA Racing Series event Friday July 24 under the lights will surely add to that tradition,” said ARCA President Ron Drager. “Everyone associated with our series really looks forward to returning to Lucas Oil Raceway.”

ARCA’s appearance in the Indianapolis area is also important for the series and it’s presenting sponsor, Menards. Indianapolis is the fifth-largest retail market for Menards, which has 287 stores in 14 Midwestern states.

“We’re excited to partner with Sioux Chief and ARCA for this very popular race.,” stated Jeff Abbott, Promotions Manager and Spokesperson for Menards. “We will be selling tickets in Menards store locations in and around the Indianapolis market and anticipate another big crowd showing up to witness plenty of action-packed racing on this great race track.”

The Sioux Chief PowerPEX® will mark ARCA’s fourth appearance in the last five years, and sixth oval visit to the .686-mile oval. The recent ARCA events have all been sponsored by Menards suppliers.

“The combined effort by ARCA, the track, and Menards, to welcome Sioux Chief as a vendor partner is what is allowing this to happen this summer,” said Mark Gundrum, Vice President of Business Development and Corporate Partnerships.

Sioux Chief Manufacturing is a family-owned American corporation based in Peculiar, Mo that designs and manufactures rough plumbing products, parts, and accessories for residential, commercial, industrial and government applications. Sioux Chief’s product line is divided into three core groups: Supply, Drainage and Support.  Sioux Chief designs, builds, and maintains its own machines, tools and dies, and equipment.  Sioux Chief manufactures more than 90% of the products it sells and takes great pride knowing industry professionals rely on them for their intense focus on crafting tomorrow’s better rough plumbing tools and equipment.

With 287 stores in 14 Midwestern states, Menards has the tools, materials and supplies for all your home improvement needs whether just needing a light bulb or can of paint to building a deck or new home. Menards is known throughout the home improvement industry as the low price leader; it’s no wonder their famous slogan – “SAVE BIG MONEY” – is so widely known and easy to remember. Menards does things right – the company’s strength and success can be seen in the well-stocked and maintained stores, the lowest prices in town and the way guests are always treated like family in a hometown hardware store atmosphere.

Track Enterprises is a leading motorsports promotion company based in Macon, IL.  In addition to running Macon Speedway, Track Enterprises holds a number of high profile events at dirt and asphalt tracks across the Midwest.  ARCA, USAC, UMP, CRA, and the Southern Super Series are just some of the touring series that compete at Track Enterprise events.  Full info on events can be found at www.trackenterprises.com.

Lucas Oil Raceway is a multi-purpose auto racing facility that includes an NHRA drag strip and a .686-mile oval track. The facility opened in 1960 an annually hosts the NHRA Chevrolet Performance U.S. Nationals as well as stock car events on the oval.

The USAC Racing AMSOIL INC. National Sprint Cars are coming to Federated Auto Parts Raceway at I-55 in Pevely, MO, this coming Sunday, June 7. The DIRTcar Modifieds will also be in action, racing for $1,000 to win. Tickets are available at www.usactickets.com.Federated Auto Parts Raceway at I-55Pevely, MODateSunday, June 7, 2020ClassesUSAC AMSOIL National Sprint CarsDIRTcar Modifieds*Modified teams need to register at https://www.myracepass.com/series/1788/registrationsTimesPits 1:00 AMStands 3:00Hotlaps 5:00Racing 6:15A limited number of grandstand tickets will be available to ensure plenty of room to spread out in the seating areas. Once they are gone, they are gone!PricesPresale General AdmissionAdults 13+ $30Kids 0-12 - $10Tickets available at www.usactickets.com . Any leftover tickets will be sold at gate on raceday.Pit Passes$30 For USAC/UMP Members$35 For Non-MembersEvent Guidelines:Masks are highly encouragedUtilize 6 foot social distancing rule where possibleBring along hand sanitizerDo not attend if having any signs of illnessLimited concessions will be availableFor any questions call Track Enterprises at 217-764-3200.

The USAC Racing AMSOIL INC. National Sprint Cars are coming to Federated Auto Parts Raceway at I-55 in Pevely, MO, this coming Sunday, June 7. The DIRTcar Modifieds will also be in action, racing for $1,000 to win.

Tickets available at www.usactickets.com . Any leftover tickets will be sold at gate on raceday.