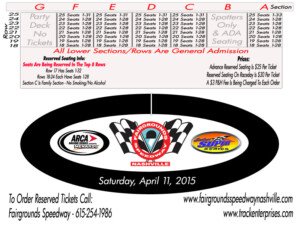 (Macon, IL – March 16, 2015) Track Enterprises, Inc. has announced that tickets are now available for purchase for many of its major events in 2015.  The company holds events at dirt and asphalt tracks in a number of states including Illinois, Indiana, and Tennessee.  ARCA, USAC, UMP are some of the major organizations that compete at Track Enterprises events.

The first event on the schedule is the April 11th return of the ARCA Racing Series presented by Menards to the Fairgrounds Speedway Nashville.  The mix of veterans and youngsters will be competing in a 200 lap event.  It’s the first appearance for ARCA since 1992.  Fans are also excited to see the return of the Super Late Models in the Southern Super Series 100.  Reserved tickets are $25 and available by calling Fairgrounds Speedway at 615-254-1986.  They will be $30 the day of the race.

The second event on the campaign is the Hoosier Hundred on Thursday, May 21, at the Indiana State Fairgrounds, in Indianapolis.  Joining the USAC Traxxas Silver Crown cars will be the UMP Modifieds.

On Friday, July 24, the ARCA Racing Series presented by Menards will run 200 laps at Lucas Oil Raceway in Indianapolis.  Joining the series for a second year in a row will be the ARCA/CRA Super Series powered by JEGS for a 100 lap event.

In August, a two-day show will be held at the Illinois State Fairgrounds in Springfield.  On Saturday, August 22, the USAC Silver Crown cars will run a 100 lap event in addition to the Sportsman Nationals.  Sunday, August 23 will see a visit from the ARCA Racing Series as they run 100 laps on the dirt mile.  The Sportsman will also compete.

The final special event, where presale tickets are now available, is a two day show on Labor Day weekend.  On Sunday, September 6, the USAC Silver Crown cars will run 100 laps at the DuQuoin State Fairgrounds.  On Sunday, September 7, the ARCA Racing Series will be on hand for 100 laps.  Both days will also feature action from the UMP Modifieds.

Presale reserved tickets are now available, to the general public, for all of the events above at discounted rate of $25 per ticket.  Tickets are $30 at the gate.

Track Enterprises is handling the sale for all events, except Nashville, and can be contacted at 217-764-3200.  For detailed information, visit the website at www.trackenterprises.com.