(TOLEDO, Ohio – March 19, 2015) – It’s hard to imagine that a man born in 1932 is still driving racecars, but such is the case for Charles “Red” Farmer. While the other original Alabama Gang members hung up their goggles years ago, the Hueytown, Alabama racing legend is still kickin’ up red rooster tails on dirt bullrings across America. 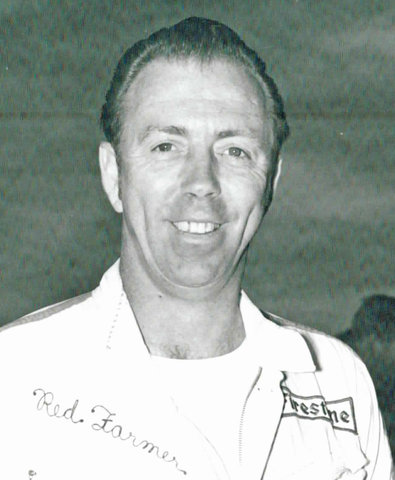 In and among hundreds of dirt late model wins across the south, Farmer also made 36 NASCAR Sprint Cup Series starts along the way. While he reached the very pinnacle of stock car racing, it was in the ARCA Racing Series presented by Menards that he made more noise, winning three times at Talladega Superspeedway in 1984 and 1988, and once at the Fairgrounds Speedway Nashville 45 years ago…all the way back on October 25, 1970. Farmer won the 200 lap race from the pole.

“I remember the race very well. At the time, all the guys were running the bigger motors…427s with the heavier cars. I took a little ’67 Ford Fairlane with a little 351 cubic inch motor. We weren’t faster than anyone, but with the lighter motor, it handled better, especially through the corners. It handled good all the way around…that’s the main thing. That’s why I outrun everyone. Everyone said I was crazy because we went for handlin’ and not speed.”

And while Farmer has always considered Hueytown his hometown, he was actually born in Nashville, Tennessee, just three-quarter-mile from where the track sits today.

“We used to walk down to the fairgrounds. Back then, there were a lot of horse barns. We’d help clean up around the horses and they’d let us ride the horses. I remember they had a big ole roller coaster that dipped down like it was going to come right down into your car. They had a swimming pool down there…we’d go down and take a dip. It was great growing up there. We loved it. The house I lived in was torn down years ago. The main road goes right through where it used to be. I lived there till I was 14 or 15, then we moved to Florida. It wasn’t until 1961 that we moved to Alabama fulltime.”

While no one disputes Farmer’s Nashville origins, his actual birth date remained a mystery for decades.

For years, his birth year was listed by several sources as 1928, but others listed his birth date as October 15, 1932. When asked about the discrepancy just prior to his 80th birthday, Farmer said, “Hey, I ain’t sure. When I was born I was too young to read the birth certificate. We’ll just go with 1928, how’s that? There are so many that I can’t even figure it out. I ain’t even sure myself anymore.”

However, the stock car legend has come clean on that mystery in recent years.

“When I passed on 80, I finally came out of the closet on that. I’ll be 83 in October.” That then reconfirms his birth year of 1932, just as America’s Great Depression was taking off.

During an incredible career that began in 1948 at Opa-locka Speedway near Miami, Florida, and 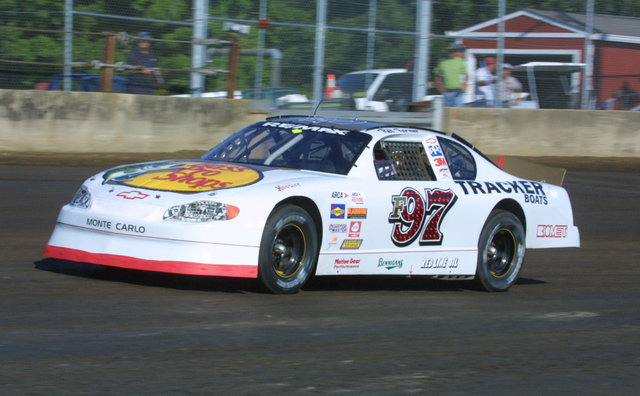 continues to this very day, Farmer also made 40 career ARCA Racing Series starts from 1969 through 2004. In his last two ARCA starts, on the Springfield and DuQuoin mile dirts, he turned in some very respectable numbers, finishing fifth at Springfield (qualified third) and 10th at DuQuoin. He had also finished fourth at DuQuoin in ’02. Not too shabby for 70-something.

And at 83, he’s still wrenching away on the wheel in his signature No. 97 dirt late model. While he doesn’t travel the country anymore, he shows up weekly at the Talladega Short Track (one-third-mile dirt) across the street from Talladega Superspeedway. His grandson, Lee Burdett, also races there.

Renowned for his ‘membership’ in the Alabama Gang, an exclusive club that includes brothers Bobby and Donnie Allison, Farmer found his greatest ARCA success behind the wheel of a Davey Allison-owned car. In fact, Farmer’s ARCA win at Talladega in ’88 was in Davey’s No. 28 Chevrolet.

“Kind of a cool story. I was Davey’s Nationwide (Xfinity) crew chief that year. In the ARCA race at Talladega he crew chiefed for me. It was his car too.”

Farmer was also named one of the 50 Greatest Drivers in NASCAR history in 1998, and was a member of the first Class of Inductees into the Talladega-Texaco Walk of Fame. When the International Motorsports Hall of Fame inducted Farmer, they had to waive their rule of five years of retirement, figuring that he never would retire.

“Raced last Saturday night at the Talladega Short Track. Qualified 12th in the super late model dirt car and finished seventh in the feature. That was my first race this year. I usually race every week, unless I go fishing or turkey hunting. I think I ran 22 races last year with 14 top-10s and five top-fives.”

Estimates of Farmer’s career victories range from 700 to 900 wins, many occurring in the late 1950s and early 60’s. In addition to winning numerous championships at local tracks, he was the NASCAR National Late Model Sportsman champion (later Xfinity Series) for three consecutive years from 1969 through 1971. Farmer was also the NASCAR National Modified champion in 1956.

Farmer’s best finish in the NASCAR Sprint Cup Series was a pair of fourth place finishes in the 1968 Middle Georgia 500 near Macon, Georgia and the 1972 Talladega 500. He was named NASCAR’s most popular driver four times.

On June 2005, Farmer, coming up on his 73rd birthday, turned heads by winning his heat race in the Prelude to the Dream at Eldora Speedway before finishing eighth in the main event against the top NASCAR Sprint Cup Series drivers of the day. Now add 10 more years to his resume, and Farmer’s still going strong.

“I have no time table. I’ll wear out, but I won’t rust out. As long as I feel competitive, I’m going to keep doing it. I enjoy going out in the shop behind the house. I’ve got three cars I tinker with. As long as I’m not in the way, and run competitively, I’m gunna keep running; that’s all there is to it. I’ve got a little arthritis I’m dealing with…who don’t at this age?… Arthur and Ritis visit me every day…I feel it in my broken bones.”

All of Farmer’s broken bones came behind the wheel of racecars. When you’ve done it as long as he has, those moments are bound to come, and Farmer had his share of spills, thrills and wrecks over the decades.

“I had a shoulder replacement from a wreck. I had a bad wreck back in the early ‘70s that busted by knee cap out, my leg. They took the knee cap out of my left leg. I finally had my knee replaced…best thing I ever did. It’s artificial, so it don’t hurt.

“My reflexes are great. I feel just as good as I did 30 years ago…that’s because I keep doing it. I’ve been racing for 67 years…it’s all I know. I ran a Hudson on the beach (at Daytona) in ’53. I remember that too. They started 136 cars, a mix of modifieds and sportsman cars…they all ran together then.”

Through it all, Farmer has been married to his one and only bride, Joan.

“We’ll be celebrating our 65th wedding anniversary in June. She thinks I’m crazy now…still racing like I am, but she had to realize it right off the bat…that I made my living in racing, and she supported it all those years…when we were chasing the NASCAR championships…every bit of it. But she thinks I’m crazy now.”

“My oldest grandson is a car chief for Roush…on the 60 car that Chris Buescher drives. In fact my son…my baby…he’s 57…he works in the shop for Roush. He’s been there 17 years…he’s Roush’s oldest employee. I’ve got a daughter that’s 60 and one that’s 63. They all come watch me race when they can, but they’re spread out all over.”

The next stop for the ARCA Racing Series presented by Menards will be Fairgrounds Speedway Nashville Saturday, April 11. The national championship stock car tour will contest a 200-lap race on the .596-mile, high-banked paved oval. Since ARCA’s inception in 1953, there have been 23 races at Fairgrounds Speedway Nashville, but none since David Green won in the No. 39 Roulo Brothers car in 1992.

Presale tickets, including reserved seating, are available for the Nashville ARCA 200 at a discounted rate by calling the Fairgrounds Speedway Box Office at (615) 254-1986.

For further information on the upcoming season of events at Nashville visit www.fairgroundsspeedwaynashville.com.