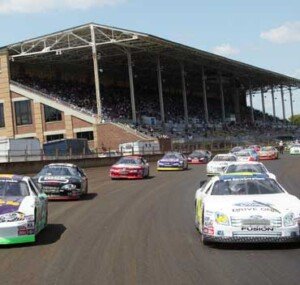 You can go with a grizzled veteran like Frank Kimmel, the 10-time ARCA champ who has eight wins on the Springfield Mile. Or there’s Mason Mitchell and Grant Enfinger, the hot up-and-comers who are ready to improve his resume and shine up his rising star. Or there are the other regulars on the ARCA Racing Series presented by Menards. The level of talent and powerful equipment is deep.

But what about the dirt-track warriors who want to defend the home turf on the world’s fastest mile dirt track. A.J. Fike is a Galesburg native who is the two-time defending champ in the USAC Tony Bettenhausen 100. Kelly Kovski, of Springfield, nearly won this race last season. Ryan Unzicker is a UMP late model star, and Kevin Swindell knows his way around a dirt track, just like everyone else with that last name.

When the SuperChevyStores.com 100 takes the green flag at 1:35 p.m. Sunday at the Illinois State Fairgrounds, the crowd will see a star-studded field battle of the lightning fast Central Illinois dirt. The race, also known as the Allen Crowe Memorial, is the star attraction on the final day of the Illinois State Fair.

The 100-lapper is the first time ARCA hits the dirt this season. The series already made stops at Daytona, Talladega, Michigan and Pocono, and it heads to the DuQuoin State Fair on Labor Day. See NASCAR star Ken Schrader go another victory. He has one win on the Springfield Mile in an ARCA car and three more at DuQuoin.

Practice for the SuperChevyStores.com 100 is scheduled from 9:00-10:00 a.m. with Menards Pole Qualifying presented by Ansell following at 11:15. The 52nd annual SuperChevyStores.com 100 starts at 1:30 p.m. All times are local. ARCAracing.com will feature live timing and scoring of all on-track activity as well as live flag-to-flag audio coverage of the race.  For tickets, call the Illinois State Fair box office.