Back-to-back dirts for ARCA on the way at Springfield, DuQuoin miles

Back-to-back dirts for ARCA on the way at Springfield, DuQuoin miles 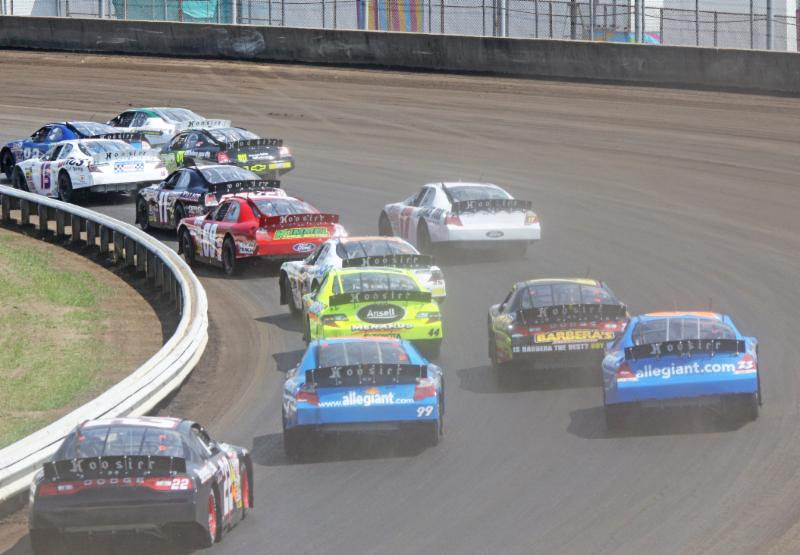 Back-to-back ARCA Racing Series presented by Menards dirt track adventures are on the way. Here’s what some of the drivers are saying about racing on dirt.
Will Kimmel: “It’s the best part of our schedule. If I could pick my top three places I’d most like to win at, it’d be Daytona, Salem and Springfield or DuQuoin. Racing these big heavy ARCA cars on dirt is the real deal; we should be doing more of it. Only thing better than running Springfield and DuQuoin is if we ran at night. Should have a dirt road course on the schedule,” Kimmel added half-jokingly.
Josh Williams: “I love it. I think it’s fun. That’s why I like this series…because we go to dirt tracks. I’d like to see even more dirt tracks on the schedule…it would make this deal even more interesting.”
Kelly Kovski: “I think it’s the best thing ARCA has going. If you look at those races, the car counts are better than most short tracks…the crowds are better…it’s got a big fan base. You look at how many people go to Eldora to see the (NASCAR) Trucks…look how many people are tuned into that…social media goes crazy. I think NASCAR looked at ARCA and decided that they should be doing it too. Then (Tony) Stewart bought Eldora, and helped push it along. Now it’s the most talked about event on NASCAR’s schedule. The dirt separates the men from the boys. I hope ARCA goes to more dirt races. I think you’d get more people to invest in the series. With the new rules packages, ARCA’s already ahead of it future-wise. They’ve got that figured out. If they add more dirt, it’ll only help grow the fan base.”
Austin Wayne Self: “I never raced on dirt till I got to ARCA, but it’s what makes ARCA so unique. I think you get a wider spread of possibilities on the dirt…you get a lot of different drivers too…it sort of levels the playing field. It really tests the drivers and makes it more interesting for everyone. The surfaces usually get pretty hard like asphalt, but when it gets dusty and the tails start kicking out, it’s hard to forget you’re on dirt. I think it’s cool.”
James Swanson: “I absolutely love it. It’s an equalizer for me. The smaller teams like ours stand a chance to run good. We don’t change tires…run the whole race on the same set so we’re already at a disadvantage, but the dirt helps equalize all that. Some of the hot dogs wreck in practice and it sets ’em back, so you have that going for you too.”
Frank Kimmel: “It’s one of the best things ARCA does…racing on the dirt. We absolutely should be doing it, and even more of it. I look forward to going to both dirts. It’s really different than anything else we do. It’s just neat to get to go to the fairgrounds. Enjoy the fairs, see the sites, grab some junk food. It’s something we always look forward to each year.”
Tom Hessert: “I think it’s great. More often than not, the tracks are in great shape. I think it’s absolutely terrific for the series. It’s part of the diverse schedule ARCA’s got…it’d be a shame if we lost it. I love the whole weekend. I normally watch the Silver Crown cars the day before…I spot for Tracy Hines, so that’s cool. Get to go to the fairs…it’s great. One thing…I wish we ran at night under the lights…that’d be about the only thing that would make it better.”
Ken Schrader: “Springfield and DuQuoin are throwbacks to the old days…it’s how our sport started at fairgrounds tracks across the country. Just regular old stock cars on dirt because that’s what we had most of back then. Fortunately, the tradition carried on. Most of the mile-dirts are gone, but the state of Illinois still has the mile dirt championship stock car races. For many great drivers, it started at Springfield and DuQuoin. These events are not only great family fun, but very important to the character and traditions of our sport. Those events today are still special to me. It’s just a different deal…with the fairs going on. The show takes on a different light. They’re special events. Back when we were running (NASCAR) Cup, the crew would get the car to the fair…we’d always come up early…get together with the Allgaier’s…take Dorothy (his daughter) and Justin (Allgaier) to the fair. When the racing was done, we’d stay at the Allgaier’s house Sunday night. It was a lot of fun.”
10-time ARCA Racing Series national champion Frank Kimmel is the all-time Springfield winner with eight wins, his most recent in 2012. Kimmel is already scheduled to drive the No. 25 Ansell-Menards Toyota at Springfield. NASCAR veteran and former Springfield winner Ken Schrader is also expected to enter the race.
Former SuperChevyStores.com/Allen Crowe 100 winners include Curtis Turner (’63), Don White (’66, ’67, ’72), Al Unser (’72), Jack Bowsher (’73), Roger McCluskey (’74), Ramo Stott (’76, ’77, ’80), AJ Foyt (’79), Joe Ruttman (’80), Dean Roper (’81, ’82, ’83, ’83, ’85, ’86), Bob Keselowski (’87, ’88, ’89, ’93), Bobby Bowsher (’91, ’92), Tim Steele (’96, ’97), Schrader (’98), Bill Baird (’99, ’04), Justin Allgaier (’06), Parker Kligerman (’09), and Kimmel (’00, ’01, ’02. ’03, ’05, ’07, ’08, ’12). Germantown, Tennessee’s Kevin Swindell won last year’s race in a Venturini Motorsports Toyota.
SuperChevyStores.com 100 Schedule
Practice for the SuperChevyStores.com 100 is scheduled from 9:00-10:00 a.m. with Menards Pole Qualifying presented by Ansell following at 11:15. The 53rd annual SuperChevyStores.com 100 starts at1:30 p.m. All times are local.
By Adam Mackey|2017-01-09T09:33:45-06:00August 5th, 2015|ARCA, DIRTcar UMP, DuQuoin State Fairgrounds, Illinois State Fairgrounds, News, USAC|Comments Off on Back-to-back dirts for ARCA on the way at Springfield, DuQuoin miles