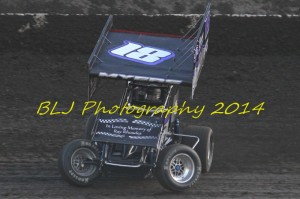 MACON, Ill. – The Midwest Big Ten Series Late Model season finishes with a bang Friday, Oct. 10 at Lincoln (Ill.) Speedway, when the championship fight is combined with action from MOWA sprint cars and POWRi midgets for an amazing tripleheader during the final weekend of dirt tracking in Central Illinois.

Ryan Little, of Pleasant Plains, leads the Big Ten Series points standings heading into the final event of the season. Greg Kimmons, of Pleasant Plains, stands second in the season-long fight with Brian Diveley, of Springfield, in third. With the top eight finishes among the 10 races used to compile the final standings for each driver, positions are up for grabs as Big Ten Series racers chase after the victory plus the big prize from the season points standings. The champion earns $2,000 from the season-ending $5,000 points fund, and the payout extends through the top 10 in the final standings. The exciting season made its way through four tracks with races also held at Macon Speedway, Jacksonville Speedway and Quincy Raceways.

Tickets for the premier tripleheader at Lincoln Speedway are $25 for adults. Children 11 to 18 years old are $7 while children 10 and under are free. Gates open at 5 p.m. with racing at 7.

The thrilling tripleheader is a one-of-a-kind racing program featuring super late models, winged sprint cars and the nation’s fastest growing midget series. It’s a great way for drivers and fans to cap an awesome racing season here in Central Illinois that included a Midwest Big Ten Series Street Stocks title won by Decatur’s Terry Reed plus exciting racing at Macon Speedway, Lincoln Speedway and Jacksonville Speedway. The races on the Springfield Mile also brought fans to their feet. The schedules are already coming together for 2015.

MOWA and POWRi also race in a doubleheader at Jacksonville Speedway on Saturday, Oct. 11.