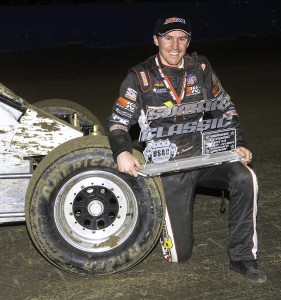 TERRE HAUTE, Ind. — After competing in pavement races last year for DePalma Motorsports, Kody Swanson took advantage of his first dirt start with the team in the Silver Crown Series presented by Traxxas by winning Sunday’s Sumar Classic at the Terre Haute Action Track. The Kingsburg, Calif., driver took the lead on lap 38 and and was untouchable over a long green-flag run to win in the Radio Hospital #63 Maxim/Hampshire.

“To be able to run with these guys all year, I don’t know if I can describe how excited I am to run for the championship with this team,” Swanson said. “I thought, ‘Man, wouldn’t we really surprise some people if we went to Terre Haute, a place that I shouldn’t be any good at, and pull off a win?’ We’ve put together a dirt sprint car and went to Florida and last night at Lawrenceburg, just trying to get me better. To reward that the first race out is special. This group works so hard and has so much passion for Silver Crown racing, so I’m really proud to win here for them.”

In the Silver Crown race, Swanson led from the outset after qualifying second, but a flurry of early cautions posed restart after restart for him to hold off challenges. Chris Windom vaulted to second, as Bobby East also moved forward to shuffle polesitter Tracy Hines back to fourth. That foursome came to a pivotal restart on lap 35, when Swanson continued to lead on the high side.

Hines was back to Swanson’s inside, about to take the lead as they finished lap 40, but a caution came out, giving Swanson the lead back. On the restart, he jumped to the bottom and pulled away from the field.

Swanson lapped up to fourth while distancing his lead, facing no challenges as the race went green the remainder of the 100-lap distance. For Swanson, it was his fourth career series win.

“I knew the top was getting awful thin, even early on, as I was leading,” he said. “I’d have to come down at some point, but it was great to race with those guys and battle my way back to the lead. I think changing with the race track, and being able to move around when you need to, is so important to win on dirt, and I’m still learning that. To put together a whole race at Terre Haute and win is exciting for all of us.”

Hines finished second in the Lightfoot Racing #16 Beast/Chevy, and Jerry Coons, Jr. moved up to finish third in his first race aboard the Fred Gormly – RPM Auto Enterprise #98 DRC/Mopar.