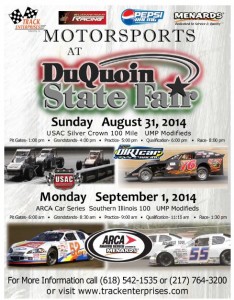 (DuQUOIN, Ill. — It’s not hard to imagine Shane Cockrum running both the Silver Crown and ARCA Racing Series presented by Menards races at the DuQuoin State Fairgrounds. After all, he’s a pretty busy guy.

In addition to working a full-time job as a fire fighter for the city of Benton, Illinois, the 32-year-old local fan-favorite runs his own fulltime towing business. And oh by the way, he races 50-60 times a year in a combination of ARCA, Silver Crown, sprints and midgets. Did we mention he’s married and the father of two girls – 13 and nine?

“To be honest, I’m not exactly sure how we keep up with it…I guess you could say I’m an ambitious guy,” Cockrum said.

He’s about to get ambitious again this weekend for the USAC Silver Crown/ARCA double header at DuQuoin Sunday and Monday, respectively. He’s one of only two drivers that will run the double-header at DuQuoin…the other being A.J. Fike, who nearly swept both at Springfield last year.

On the ARCA side, Cockrum drives the No. 71 Tim Cooksey Oil Company Ford for Brad Hill Racing.

“I think we’re definitely an underfunded team…feels more like a mom and pop organization, and that’s a good thing. Everyone pitches in what they can…I really like the feel of Brad Hill Racing. Nobody gets at each other; we all have one goal in mind – knock off these big, high-dollar teams. Be the little guy that could I guess.”

Car owner Hill, 62, just retired and wants to throw more energy at his racing program. Hill also spent 12 years in the NASCAR Nationwide and Camping World Truck Series as a jackman for several teams prior to fielding his own ARCA cars.

“We’re so excited,” Hill said. “We’ve got Tim Cooksey Oil Company on as our sponsor…he supplied us with a new D-3 RoushYates engine. We went from 720 horsepower to 840, and it definitely showed at Springfield. I had tears in my eyes when Tim told me he’d be supplying the engine. And Shane…what can you say? He’s as good as it gets when it comes to the dirt.”

And it doesn’t hurt that no driver has more hometown appeal at DuQuoin than Cockrum, who hails from very nearby Benton.

“DuQuoin is 20 minutes from the house,” Cockrum said. “We seem to have a little better luck there, and I credit that to our hometown crowd. In driver intros, you hear your name called out and you hear that roar from the crowd. It really gives you that little extra. It makes a difference.”

On the Silver Crown side, Cockrum drives for Hardy Boys Motorsports, an organization that reaches way back to the USAC Stock Car days.

“Hardy Boys Motorsports ran USAC Stock Cars before ARCA with Butch Garner and a couple of other drivers. They’ve always been family friends. We have a car capable of winning; we finished fourth there (DuQuoin) last year and fifth at Springfield…third at Eldora. We’re definitely going in the right direction with that program.”

He’s also headed in the right direction with Brad Hill Racing, finishing an ARCA career-best eighth last year at Springfield, and answered with a ninth place finish at Springfield this year. That said, Cockrum believes that DuQuoin is a better track for him.

“Springfield and DuQuoin are two totally different tracks and you drive them completely different. I really think DuQuoin is a better track for us. We were poised for a top-five run last year (at DuQuoin), but we got turned on the front straightaway on the final restart. Felt like I had a top three or four car… sometimes it works out; sometimes it doesn’t.”

Outside of running back-to-back races on the same mile dirt track, Cockrum says there isn’t a lot of cross-over from a 1,500-lb. open wheel car to a 3,400-lb ARCA car.

“They’re really two totally different disciplines. Getting in a hundred miles the day before the ARCA race is beneficial, but there’s a big difference in the way you put a 1,500-lb. car in the corner and the way you go in with the ARCA car. The ARCA car is really cool the way everything slows down; it’s like running in slow motion.

“I really think the biggest difference between the two is that the changes in the handling in the Silver Crown cars are far more dramatic. You have 75 gallons of fuel right behind you in the Silver Crown car, so you’ll lose four-to-five-hundred pounds of fuel weight over the course of the race, and you’re always, constantly chasing that feeling. The ARCA car is way more steady and stable where the changes throughout the race are smaller; it’s just a way different environment.”

Brad Hill Racing and Cockrum have been very instrumental in the promotion of the Southern Illinois 100.

“We had our ARCA car out at the Street Machine Car Craft Nationals at the (DuQuoin State) Fairgrounds, and we handed out a lot of information about the race. We’ve been hanging ‘Welcome Race Fans’ banners up at Federated stores in the area, and people have been asking the stores about buying tickets…we’re getting more excited every day.”

“That went really well,” Hill said. “We actually painted pit stalls, so everyone this year will have a clearly defined pit box, rather than the little wood stakes that we’ve used in the past. It’s going to be neat…so much safer showing you where your actual pit stall is.”

The event will feature live timing and scoring for all on-track activity at ARCAracing.com, as well as live flag-to-flag audio coverage for the race.