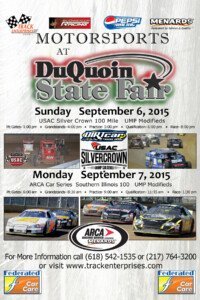 (DuQUOIN Ill. – August 25, 2015) – As competitive as the recent Allen Crowe ARCA 100 was at the Illinois State Fairgrounds, it’s going to get tougher yet when the 62nd annual Southern Illinois 100 presented by Federated Car Care rolls off at the DuQuoin State Fairgrounds mile-dirt Labor Day Monday, September 7.

And that’s because veteran Ken Schrader, who was absent from the line-up at Springfield, will be returning to the cockpit of the No. 52 Federated Auto Parts Chevrolet for this year’s championship stock car classic at the DuQuoin “Magic Mile”. Schrader, 60, the oldest winner in ARCA history (Salem/April, 2015), won the Southern Illinois 100 as recent as 2013.

Schrader’s special connection to DuQuoin goes back to his youth.

“First time I went (to DuQuoin) was ’64,” Schrader said. “My dad and I went. I remember sleeping in the back of his station wagon excited as could be.

“I thought it was the biggest race I’d ever seen. I thought there couldn’t be a bigger race in the world than this. I love the place. Been going ever since.”

Schrader is among a growing list of entrants for the annual ARCA stock car classic at the historic fairgrounds horse track, one that includes 10-time series champion Frank Kimmel, who has five wins at DuQuoin. Only Tony Stewart’s victory in 2003 prevented Kimmel from sweeping five consecutive wins on the “Magic Mile”.

“It’s been a few years since we’ve won one at DuQuoin, and we’re probably in our best shape ever to win again,” Kimmel said. “We’re definitely looking forward to it. The fairgrounds tracks hold special meaning for me. When you consider the names that have won there over the years, you can really appreciate the history of the place, when, back in the day, you had to do well at these places to win championships and go places.”

Illinois Drivers on the March at DuQuoin
Expect a strong contingent of Illinois drivers in the field at DuQuoin, including local Benton, Illinois favorite Shane Cockrum. Cockrum, who won the USAC Silver Crown Ted Horn 100 at DuQuoin last year, is one of two drivers attempting both the Ted Horn 100 champ car race and the Southern Illinois 100 stock car race this year. The other driver entering both is Galesburg, Illinois’ A.J. Fike, who won the Allen Crowe ARCA 100 last Sunday on the Springfield mile-dirt.

Raceday Schedule
The 62nd running of the Southern Illinois 100 presented by Federated Car Care is scheduled to get the green flag at approximately 1:30 p.m. local Central time. Practice is scheduled from 9:00-10:00 a.m. with Menards Pole Qualifying presented by Ansell following at 11:15. ARCAracing.com will feature live audio coverage of all on-track activities including flag-to-flag coverage of the Southern Illinois 100. Live timing and scoring of all on-track activities and live chat box will also be available throughout the afternoon at arcaracing.com.