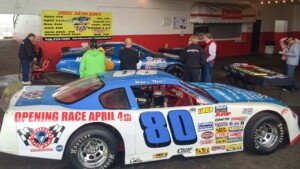 (Nashville, TN – March 14, 2015) Despite a wet weekend and the postponement of the Saturday afternoon practice for weekly divisions, a number of fans, media, and officials stopped by Fairgrounds Speedway Nashville for an afternoon media session.

The event was held to promote the April 4 season opener and the April 11 return of the ARCA Racing Series presented by Menards and the Southern Super Series Super Late Models.

An ARCA car from the Andy Hillenburg shop in Charlotte, NC and a two seater Late Model were placed on the main concourse to promote the two upcoming events. ARCA fan guides, Fairgrounds Speedway schedules, and Track Enterprises’ information packets were handed out to those in attendance.

Terrell Davis, from Middle Tennessee Racing News and the WAKM Pit Pass Radio Show shared his excitement about the April 11 event stating, “An ARCA race is something we have been wanting for a long time. I’m positive it will be a huge success.”

Tony Formosa, the promoter of the season long schedule, and Track Enterprises President Bob Sargent, who is handling the April 11 race, were met by a number of locals looking forward to the race. Many of the attendees also enjoyed a delicious lunch, put together by D&D Events Management.

Presale tickets, including reserved seating, are available for the April 11 return of ARCA at a discounted rate by calling the Fairgrounds Speedway Box Office at 615-254-1986.

For further information on the upcoming season of events at Nashville visit fairgroundsspeedwaynashville.com. For info and updates on the April 11 event at the Fairgrounds featuring the ARCA Racing Series presented by Menards visit trackenterprises.com or like them on Facebook.