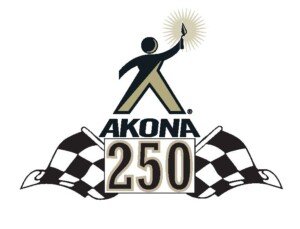 (ELKO, Minn. – June 21, 2014) – Grant Enfinger said he had a rocket ship from the start Saturday night at Elko Speedway. That rocket ship, otherwise known as the No. 90 Triple K Construction-Casite-Ford, lapped all but three cars and cruised into victory lane in the Akona 250 presented by Federated Car Care.

It was Enfinger’s fourth win of the 2014 season and third on a short track.

“Our short track program is really on right now,” he said. “Everyone on this Team BCR team is just doing exactly what they need to be doing.”

Tom Hessert finished second in the No. 77 Caregard-AxiomWarranty.com Dodge, polesitter J.J. Haley third in the Braun Auto Group Venturini Motorsports Toyota and Justin Boston fourth in the No. 25 ZLOOP Toyota. They were the only cars on the lead lap when the race was complete.

Enfinger started on the outside pole but grabbed the lead right away after Haley spun his tires when the green flag dropped. He led the first three laps before he got spun in turn two when he got tangled up with a car he was about to lap. He made a pit stop and was able to stay on the lead lap as Josh Williams took over the lead.

“I thought our day was done,” Enfinger said. “But, (crew chief) Kelly Kovski stayed calm and he kept me calm. He made the adjustments on the car and we took off after that. The car was working on the inside or the outside and that was really the key because when we were at the back of the field, we had to use the outside to get around everyone. Then, when we were battling for the lead, we had to use the inside.”

Enfinger led 211 laps overall, and regained the lead from Hessert on lap 43. Williams led from lap three to 36 and Hessert from 37 to 42.

Kovski said he didn’t have to do anything special to keep Enfinger calm.

“He was shook up a little bit,” said Kovski, who not only has been Enfinger’s crew chief this season but has experience as an ARCA driver. “But, Grant usually keeps his composure anyway. He did everything right. He’s on top of his game right now.”

Ken Schrader finished fifth, Williams sixth for the second year in a row, Kyle Benjamin seventh in the Roulo Brothers Racing return to the ARCA series after two races off, Austin Wayne Self eighth and John Wes Townley ninth.

Hessert’s runner-up finish was a rebound of sorts from a tough stretch of races.

“Grant was able to get a big lead on us,” Hessert said. “But, we had a good run. Second-place was good for the Cunningham Motorsports team, especially after the last couple races we had.”

Haley became the youngest driver in series history to win the pole when he set a track record in qualifying.

“I made a mistake on the start,” he said. “I spun the tires. But, as the race went on, we were better. That’s what we are here for, to learn those things. It was a good race. The Venturini team gave me a fast car and had great pit stops.”

Boston was pleased with his fourth-place finish.

“I’m happy we finished the race,” he said. “Those first 25 laps were interesting. This Toyota Camry was good.”

Schrader, the defending polesitter, wasn’t happy with his finish.

“We were just not good,” he said. “We’ll go next to Winchester. I always look forward to the next race.”

Williams led more than 30 laps and was a factor in the race until he had problems on pit road. He recovered to still finish sixth.

“I can’t think the guys on this team and my mom and dad and Southwest Florida Cable Construction and Pop-Tent enough,” he said. “I wish my mom and dad were here tonight. It was a good run for us. I’ll take it. I wish all of our races were on these short tracks.”

In addition to Enfinger’s sixth career win and Haley’s record-setting pole award, it was a milestone night for the ARCA Racing Series as it was the first race to be broadcast on CBS Sports Network. The start of the race, in fact, was delayed slightly as the network’s previous show – an Arena Football League game – went longer than expected.

“This is the first live stock car race on CBS Sports Network,” said Billy Stone, a CBS executive on hand for the race. “This is a big moment for us.”

For complete Race Results, and much more… www.ARCAracing.com