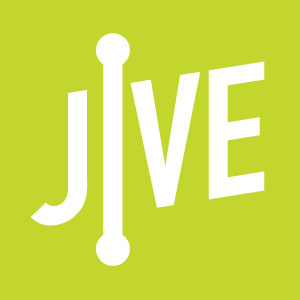 TALLADEGA, Ala. (April 29, 2016) – Officials from Jive Communications announced today that the international communications company has entered into a multi-faceted motorsports marketing program for the 2016 racing season. The announcement took place at Talladega Superspeedway during the ARCA and NASCAR weekend activities at the 2.66 mile speedway.

“We are pleased to announce today a partnership with the Athenian Motorsports team and driver John Wes Townley for primary sponsorship of both the NASCAR Xfinity Series and the ARCA Racing Series presented by Menards,” commented John Pope, CEO of Jive Communications. “We’re excited and grateful to begin our association with racing with these prominent brands and franchises.”

Jive will serve as primary sponsors of the Athenian Motorsports #05 Chevrolets for the NASCAR Xfinity Series events in Talladega on Saturday April 30 and on Friday night July 1 in Daytona. The 12-race ARCA program will debut during Friday’s General Tire 200 at Talladega. Jive will also serve as an associate sponsor on the No. 05 Chevrolet in the NASCAR Camping World Truck Series.

“I turned my very first laps in ARCA and NASCAR in 2008, and I can tell you this is the most excited I’ve been about racing,” said the 26-year-old Townley, a two-time Daytona ARCA race winner and the current ARCA points leader heading into the General Tire 200 at Talladega.

“Jive is a company based in Utah that is entirely new to the motorsports platform. I feel like Athenian Motorsports and I are well-positioned to bring Jive some spectacular results on a regular basis in both ARCA and NASCAR.

“The timing of this deal is perfect. We’re delighted that Jive will be along for the ride. I’m confident this is going to be a great relationship.”

Brian Moore, VP of Sales for Jive Communications, talked about additional involvement for 2016.

“In addition to the team sponsorship, we’re delighted to announce that Jive is joining ARCA as the Official Communications Sponsor for the 2016 season,” said Moore. “We will serve as the presenting sponsor for a pair of ARCA events on this year’s schedule – at Lucas Oil Raceway July 22, and the Illinois State Fair event August 21,” Moore continued.

Both the Lucas Oil Raceway and Illinois State Fair events will be promoted by Track Enterprises.

“We at Track Enterprises are proud to have Jive Communications as our 2016 partner,” said Bob Sargent, President of Track Enterprises. “We look forward to Jive being the presenting sponsor for both our Lucas Oil Raceway July 22 event and our Illinois State Fair August 21 event.”

The ARCA sponsorship will include per-race and year-end contingency awards for the race teams, in addition to the Series sponsorship.

“We are pleased to welcome Jive to the ARCA family of corporate partners,” commented Mark Gundrum, Vice President of Business Development and Corporate Partnerships for ARCA. “We look forward to promoting their products throughout the 2016 season, and beyond.”

In July 2014, Athenian Motorsports began operating out of a new, state-of-the-art, 43,000 square foot facility in Concord, N.C. The team scored its first NASCAR victory at Las Vegas Motor Speedway in October 2015. In 2016, the team is fielding entries in the NASCAR Camping World Truck Series and ARCA Racing Series presented by Menards. AMS is also fielding a car in the three NASCAR Xfinity Series races in Daytona and Talladega.

Track Enterprises is a racing promotion company based in Macon, Ill., which oversees Macon Speedway, Lincoln Speedway, Terre Haute Action Track, and hosts a number of ARCA, USAC, UMP, POWRi, WOOLM, and other top events throughout the Midwest. Track Enterprises info can be found online at www.trackenterprises.com or on Facebook at facebook.com/TrackEnterprises.