(TOLEDO, Ohio – March 25, 2015) – Officials from the Automobile Racing Club of America and Track Enterprises have announced a promotional marketing partnership with Nashville based Operation Troop Aid, a not-for-profit organization dedicated to the men and women of the US Armed Forces. 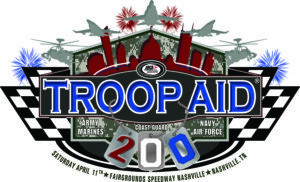 Operation Troop Aid is a non-profit 501 (c) (3) agency that works to provide care packages for United States service members, using revenue generated through sports marketing and music events. So Good Entertainment, a Nashville-based marketing and consultation agency, and Operation Troop Aid are working with Track Enterprises, the promoter of the Nashville ARCA race.

“It is an absolute honor for OTA to partner with SGE, ARCA & Track Enterprises in support of our Troops and even more, to be doing so in our hometown of Nashville.  For 10 years Troop Aid has traveled the nation with events in support of our Troops and I can think of no better way than to come home and have the first major event of our 2015 season be the TROOP AID 200 with ARCA,” said Mark Woods, Operation Troop Aid Founder & CEO. “Report for duty Nashville and support our Troops with us.”

will be the third race of the national touring series’ 20-race season. It will be part of a double-header race weekend with the Southern Super Series, which will run a 100-lap late model race prior to the 200-lap ARCA Racing Series event.

“Track Enterprises looks forward to working with Fairgrounds Speedway Nashville, the Fairgrounds staff, ARCA, and So Good Entertainment to bring this event to the historic and exciting venue,” stated Bob Sargent of Track Enterprises.  “With the addition of Troop Aid, and all the great things they do for our military, we feel it will just add to an action packed day.”

The first 500 Military members, active or retired, will receive free entry for themselves and one family member at the gate on April 11.

Nashville and the Tennessee State Fairgrounds facility has a rich stock car racing history. While racing began at the fairgrounds as early as 1904, the track which evolved into the current day Fairgrounds Speedway Nashville held its first race in 1958. The track was also home to 42 NASCAR Sprint Cup races from 1958-1984 with Richard Petty leading all drivers with nine wins followed by Darrell Waltrip with eight. Other Cup winners include Joe Weatherly, David Pearson, Bobby Isaac, Cale Yarborough, Buddy Baker, Bobby Allison, Benny Parsons and Dale Earnhardt. The NASCAR Xfinity Series raced there nine times from 1984-2000, and the NASCAR Camping World Truck Series held five races from 1996-2000. Under the management of promoter Tony Formosa, Jr. the track continues to present regularly scheduled races throughout the summer months, highlighted by the annual All American 400.