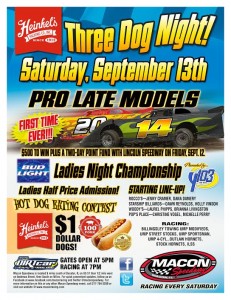 MACON, Ill. – A driver will make history on Saturday when he steps into victory lane at legendary Macon Speedway for the win in the first ever Pro Late Model feature at the fifth-mile high banked dirt oval. Macon Speedway is proud to announce the addition of Pro Late Models to the program on Sept. 13 with a $500 to win feature race plus a two-night point fund in conjunction with the program the previous night at Lincoln (Ill.) Speedway. With the big paycheck and the possibility of even more money with the two-night doubleheader, Macon Speedway expects a high number of crate late models to arrive at the legendary fifth-mile high banked oval for a fabulous night of racing.

Macon Speedway is happy to open its legendary fifth-mile high banked dirt oval for the first time to the pro late models. UMP national points will also be up for grabs.

Like Macon Speedway, Lincoln Speedway will also pay $500 to win in the pro late model class on Sept. 12. The winner of the two-night point fund earns another $400, followed by $200 for second, $150 for third, $100 for fourth and $75 for both fifth and sixth. Pro late models have become a strong part of other tracks in the state, and Macon Speedway wants to give them a chance to run at the famous oval. Drivers are already talking about the opportunity after Macon Speedway first began spreading the word last month. So get your trailer loaded and head to Macon Speedway for some fun on the world’s fastest fifth-mile dirt oval.