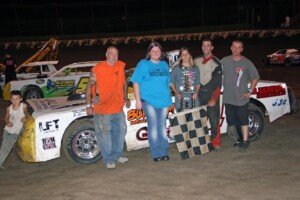 MACON—Terry Reed should buy a lottery ticket. Everything went perfect for the driver leading the Big Ten Street Stock Series as he would claim the championship to the 10-race series, and the Decatur driver would win the $500 top prize in the Big Ten Street Stock Series race at Macon Speedway on Saturday. Along with that 25-lap victory in which he led every lap, he was the fastest qualifier, won his heat and the 6-lap Dash for Cash which put him on the pole position for the main event.

Trailing him in the Big Ten Street Stock Series is Bobby Beiler, who followed him around for the entire race and lost power on the 24th lap but managed to finish.

Jeremy Nichols overcame traffic and took the lead away from Tim Bedinger en route to the checkered flag in the Sportsman division feature.

Dave Crawley, Jr. had little difficulty getting into the lead in the Billingsley Towing Modifieds feature.  Starting in the front row, he took the lead and dashed away from Guy Taylor and company for his second feature win in a row.

Another driver who had little trouble with the lead was Beach House Mini Sprints feature winner Jeremy Camp. He stuck to the bottom groove and weaved through the lapped traffic and managed to build momentum heading to the POWRi Midgets & Micro Sprints double feature program next Saturday.

Adam Webb won for the second consecutive week in the Outlaw Hornet division. Webb, the defending National Hornet Champion, took away with the lead and went on for victory.

Marty Sullivan had to hold off Jonathan Drake in the fourth turn to get the win in the Stock Hornet class.

Macon Speedway hosted the final event leading to the Bud Light Ladies Night Championship Race on September 13th as five girls from Pop’s Place raced to the checkered flag and Christine Vogel added her name to the list of ladies racing in the championship next month.