Sterrett, of Bloomington, IN, pocketed $1,000, needing only to keep Nicely behind him on a restart with four to go in the 20-lap feature at the half-mile dirt oval. Saturday’s winner, Josh Harris, was third with Ken Schrader and Dave Baldwin rounding out the top five.  There were 23 cars entered in the event.

Also on hand was the Pro Late Model class.  It was the first time that UMP had sanctioned a Pro Late 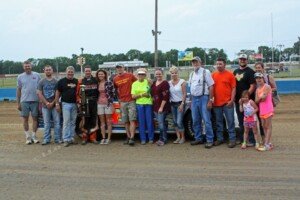 Model race at the facility.  Bloomington, IN driver Jake Humphrey took the lead on the start with Bobby Regot moving into second.  Regot followed closely and made a bid over the last couple of laps.  On the final circuit, Regot drove hard to the outside lane but couldn’t get enough bite to make it work.  Remington Gill, Scott Plew, and Andy Scoles completed the top five.

Additional money was added to the purse by Peter Massoni from California.  Massoni always wanted to help out by donating at a race and was in Indiana on a racetrack tour.  He attended an event at the Indianapolis Speedrome on Saturday and Terre Haute on Sunday.  His home track is Silver Dollar Speedway in beautiful Chico, CA.  Part of Massoni’s gift went to Sterrett, which made the winner share $1,250 and the other was added into the middle of the Pro Late Model purse.

For more information on racing at Terre Haute, visit terrehauteactiontrack.net or trackenterprises.com.  Don’t forget to like Terre Haute Action Track and Track Enterprises on Facebook.  By phone, you can contact 812-232-4040 or 217-764-3200.