Illinois will be well represented in the August 22 “Tony Bettenhausen 100” at the Illinois State Fairgrounds in Springfield, round eight of the 2015 USAC Silver Crown Championship Series. 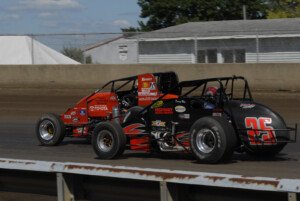 Continuing a tradition dating all the way back to 1934, the annual auto racing spectacular unfolds on the one-mile dirt oval with morning practice at 10 am and for the first time in years the event is expected to include a last-chance race due to the influx of entries expected. A 100-mile feature concludes the action.

Chris Windom of Canton, Ill. is the most recent series winner, claiming the 50-lap “Hustle on the High Banks” at Belleville, Kans. July 31. He is sixth in the current standings.

Levi Jones of Olney, Ill., USAC’s 2010 and 2011 Silver Crown Champion, will continue his quest for his initial Illinois Silver Crown victory, although he is a former winner of the prestigious “Hoosier Hundred” in Indianapolis.

Chris Urish of Elkhart, Ill. hopes to rekindle the fire which sparked his victory in the 2013 “Ted Horn 100” at the DuQuoin State Fair.

A.J. Fike of Galesburg, Ill., fourth in the current standings, may be the strongest Illini candidate for victory Saturday. He won the 2012 and 2013 “Tony Bettenhausen 100.”

Kody Swanson of Kingsburg, Calif. tops the Silver Crown points ahead of runner-up Jerry Coons Jr. and third-ranking Aaron Pierce. Swanson has been dominant the past two years, claiming the 2014 title and winning six of the last 10 series dirt races, including last year’s “Tony Bettenhausen 100.”

Coons finished second at Belleville and third at Terre Haute this year, while Pierce was second in the “Hoosier Hundred” in Indianapolis and has “top-10s” in six of the seven races so far this season.