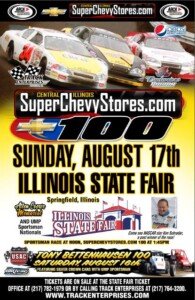 SPRINGFIELD, Ill. – It’s race day at the Illinois State Fairgrounds Sunday morning. ARCA officials, the state fairgrounds’ crew and Track Enterprises are preparing the track and the grounds for the SuperChevyStores.com 100 that takes the green flag at 1:35 p.m. today.

The race is still ready to go as scheduled, and ARCA teams have already unloaded and have sent their cars through technical inspection. So it’s time to get to the state fairgrounds to watch ARCA’s pavement stars go against some serious dirt track specialists in a turf battle.

It’s the first time this season the ARCA Racing Series presented by Menards has hit the dirt. The field will likely include more than 30 cars today.

The Sportsman Nationals will also race a feature at noon. Come see your local short track heroes take to the Springfield Mile.

Tickets are available at the Illinois State Fair box office.