Home/Uncategorized/Swindell a late entry for ARCA SuperChevyStores.com 100 Sunday
Previous Next 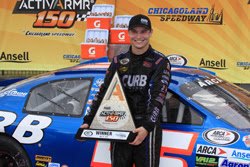 SPRINGFIELD, Ill. — Kevin Swindell reunites with Venturini Motorsports (VMS) this weekend to substitute for driver John Wes Townley at the famed Springfield Mile driving the No.15 Zaxby’s Toyota.
Townley will miss his third consecutive ARCA race after an accident at Pocono Raceway on August 1, 2014.

“It’s an unfortunate situation John (Townley) won’t be able to return this week but I’m glad for the opportunity Zaxby’s is providing me to return to the series driving the No.15 car,” stated Swindell. “The last time I ran here with Venturini we had a winning car but I got blocked in on pit road and it cost of the win. I’m looking forward to going back to Springfield and battling for the victory.”

Since his stint with VMS, Swindell has gone on to race 18 NASCAR Nationwide races and made his NASCAR Sprint Cup debut in 2013 at Loudon earning a 38th place finish.

ARCAracing.com will feature live timing and scoring of all on-track activity as well as live flag-to-flag audio coverage of the race. For tickets, call Track Enterprises or the Illinois State Fair box office.