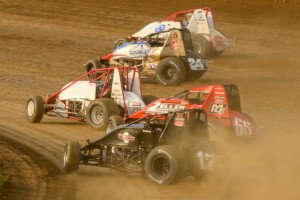 After two months of silence, the Terre Haute Action Track roars back to life on Friday night, September 18 for the Jim Hurtubise/Tony Hulman Classic.  The USAC Sprint cars will be making appearance #2, while the UMP Mods are also on schedule for the final event of 2015 at the blazing fast half-mile.

Open wheel fans across the midwest are waiting for this show with much anticipation, as the last event at the Action Track was the Indiana Sprint Week show in July which provided great racing in front of a near capacity crowd.  19-year old Brookston, IN driver Aaron Farney used the highside of the half-mile to run away through the field, slicing through traffic, and capping it off with a spirited fist pump at the finish line.  It was Farney’s first career win, besting the field of 37 drivers on hand.

Looking back at the history of the Jim Hurtubise race, Brady Bacon won last year, while Jerry Coons, Jr. claimed the hardware in 2013.  Since the race came back in 2010, other winners include Jon Stanbrough, Chris Windom, and Chase Stockon.  The early years of the Hurtubise saw racing legend, Jack Hewitt take the first two victories in 1990 & 1991.  This year’s event will mark the 15th Jim Hurtubise named event.

Due to a rainout in May, the event will be co-named the Tony Hulman Classic.  The race name carries a rich history, as 44 previous events have been held.  USAC veteran, Dave Darland, won last year’s Tony Hulman race.  Other recent winners include Levi Jones (’08, ’09), Jerry Coons, Jr. (’10, ’13), Chris Windom (’11), and Bud Kaeding (’12).  Cary Faas and Levi Jones have the most wins with three apiece, while eight drivers have won two events.

Adding to the Friday, September 18 show will be the UMP Modifieds, a class which has been a 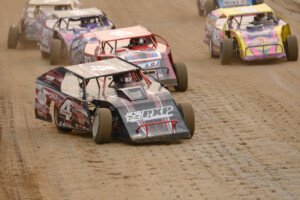 More information on the season finale may be found at www.terrehauteactiontrack.net or www.trackenterprises.com.