TOLEDO, Ohio (Nov. 10, 2016) – The 65th consecutive season for the ARCA Racing Series presented by Menards is set in stone, as Series officials released the 2017 schedule Thursday to include 20 race-dates across 13 states. 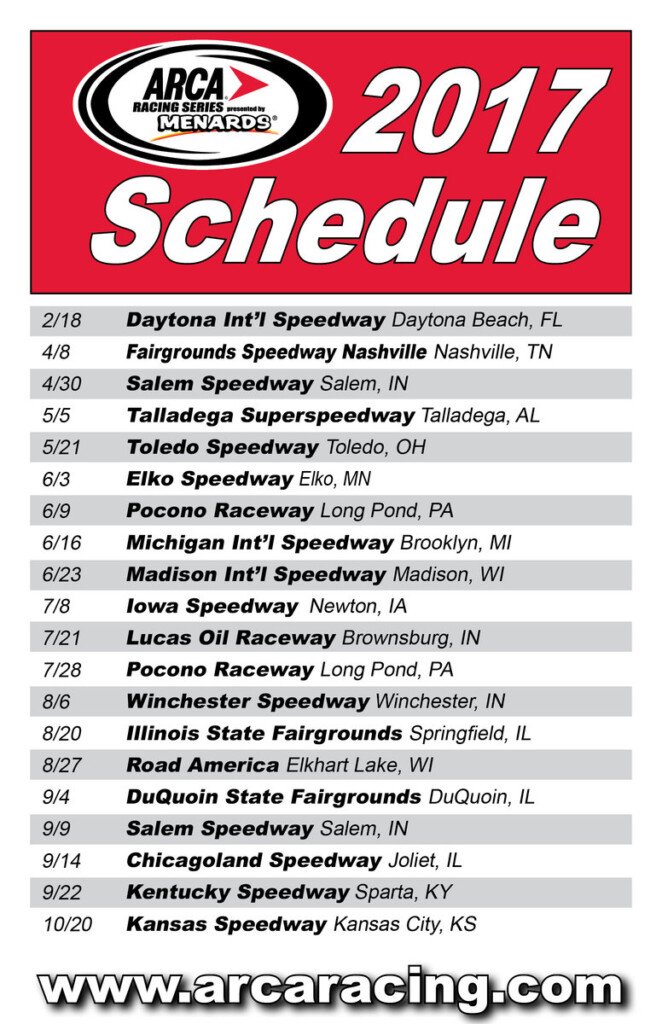 Another healthy mix of superspeedways, paved short tracks, dirt tracks and a road course will highlight the 2017 tour, including returns trips to Elko Speedway in Minnesota and Road America in Wisconsin. ARCA raced at the Elko short track 2012-2014 and once at the Road America road course in 2013.

“We are pleased to announce our full and complete 20-race, 2017 schedule,” said ARCA President Ron Drager. “From superspeedways recognized as among the most famed tracks in the world, to historic short tracks, to mile dirt tracks and road course venues, the schedule highlights the long standing diversity of the ARCA Racing Series presented by Menards. We’re especially pleased to welcome back to the schedule Elko Speedway and Road America.”

The series will kick off the 2017 campaign with the 54th running of the Lucas Oil 200 at Daytona February 18 which precedes NASCAR’s Unlimited later that night. For the sixth consecutive year, the ARCA Racing Series will crown the Series champion at Kansas Speedway where ARCA’s race season concludes under the lights October 20.

In between Daytona and Kansas is one of the most diverse schedules in racing with race events on eight superspeedways, nine paved short tracks, two dirt tracks and one road course.

The series will race at conjunction event venues with all three of NASCAR’s top-tier divisions including Cup, Xfinity and Camping World Trucks, as well as the Verizon IndyCar Series, the USAC Silver Crown Series and the ARCA CRA Super Series.

Prior to the 2017 season, series officials will celebrate the 2016 season one final time with the annual national championship awards banquet at the Indiana Convention Center in downtown Indianapolis Saturday, December 10.