ARCA, USAC, & UMP To Race At Many Top Venues

Track Enterprises, a racing promotion company based in Macon, IL, has announced its 2017 special event schedule.  The new slate includes the traditional stops for ARCA at the Illinois dirt miles, in addition to Lucas Oil Raceway in Indianapolis and a third year visit to Fairgrounds Speedway Nashville.  Track Enterprises added a fifth ARCA event this season, as Elko, MN makes a return to the schedule.  Other series that are part of this year’s events include the USAC Silver Crown Series and Sprint Cars, the ARCA/CRA Super Series, the Southern Super Series, along with UMP Modifieds and Sportsman.

The first event of the season is a third year stop at Fairgrounds Speedway Nashville with the ARCA Racing Series presented by Menards on Saturday, April 8.  This year, action will begin on Friday, April 7, for a two-day show with the ARCA/CRA Super Series Super Late Models and Southern Super Series.  With ARCA as well as two of the best touring Super Late Model tours in the country, this is a can’t miss event in a fun destination city. 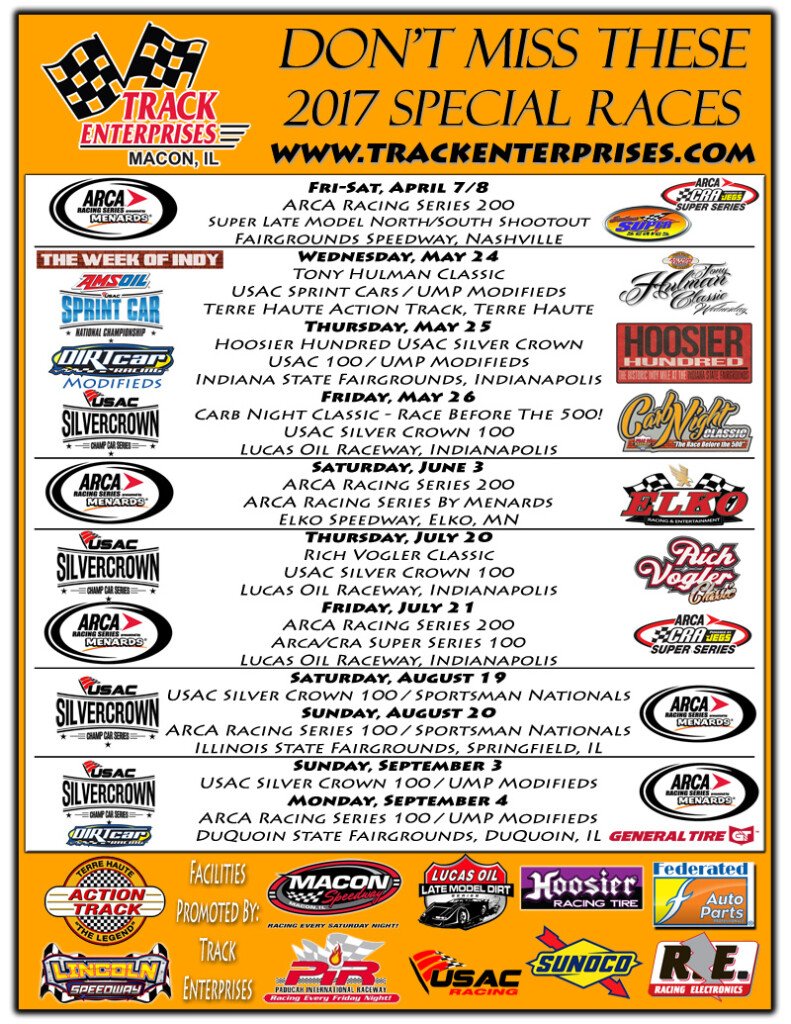 Next up will be “The Week Of Indy”, a series of events promoted by Track Enterprises that were highly successful in 2016.  It all begins on Wednesday, May 24 with the Tony Hulman Classic at the Terre Haute IN Action Track, featuring the USAC AMSOIL National Sprint Cars and UMP Modifieds.  On Thursday, May 25, the annual Hoosier Hundred for the USAC Silver Crown cars is on tap at Indiana State Fairgrounds in Indianapolis.  Joining the Champ Cars will be the UMP Modifieds for a $2,000 to win special event.  Wrapping up “The Week Of Indy” for TEI, will be the Carb Night Classic at Lucas Oil Raceway, featuring the USAC Silver Crown cars.

Returning to the Track Enterprises schedule in 2017 is the ARCA Racing Series presented by Menards event at Elko Speedway in Elko New Market, MN.  The event was a highly popular stop on the schedule a few years ago and makes a return after a two year hiatus.  During the three visits, Brennan Poole, Frank Kimmel, and Grant Enfinger left with victories.

In early July, Track Enterprises’ officials turn their attention to three of the tracks that they promote on a weekly basis, Lincoln and Macon Speedways in Central Illinois as well as the Terre Haute Action Track in Indiana.  Newly added this year, is a stop for not only the Summer Nationals Hell Tour Late Models, but the World Of Outlaws Craftsman Late Models as well at the Terre Haute Action Track on Friday, June 30.  On Sunday, July 2, the Summer Nationals, will be thrilling fans at the Lincoln Speedway ¼-mile.  The series will then visit Mighty Macon Speedway on Thursday, July 6 for the Herald & Review 100.

Leading up to the Brickyard 400 at IMS, Track Enterprises will be hosting a couple of shows in town with the  USAC Silver Crown Champ Cars at Lucas Oil Raceway for the Rich Vogler Classic.  That event will get the race weekend started on Thursday, July 20.  The following night, fans will see the ARCA Racing Series presented by Menards as well as the ARCA/CRA Super Series powered by JEGS at the same venue.  The two day show will feature the top three series that visit Lucas Oil Raceway.

Arguably the biggest event on the Track Enterprises season takes place on Saturday and Sunday, August 19 and 20 at the Illinois State Fair.  It’s the annual stop for the ARCA Racing Series presented by Menards and the USAC Silver Crown Series.  Last year, rain washed out the USAC portion on Saturday but the ARCA cars were able to hit the track on Sunday to complete their exciting event.  The UMP Sportsman are back on for another season of racing at the fair.

After running on Saturday and Sunday last year, the DuQuoin IL State Fair races have each been moved back to their regular days of Sunday and Monday, September 3 and 4.  Joining ARCA will be the USAC Silver Crown cars and UMP Modifieds.  Racing at the Magic Mile was phenomenal in all three classes in 2016.

For more information on the upcoming racing schedule, visit www.trackenterprises.com, like the Facebook page at www.facebook.com/TrackEnterprises, or call the office at 217-764-3200.