By Jay Hardin (August 9, 2016)-Race fans attending the 55th Bettenhausen 100 USAC Silver Crown Series event at the Illinois State Fair on August 20 will notice a slight change to the name of the event.  Instead of referring to the event as the “Tony Bettenhausen Memorial 100” the event will now be referred to as the “Bettenhausen 100” in honor of one of the first families of American automobile racing. 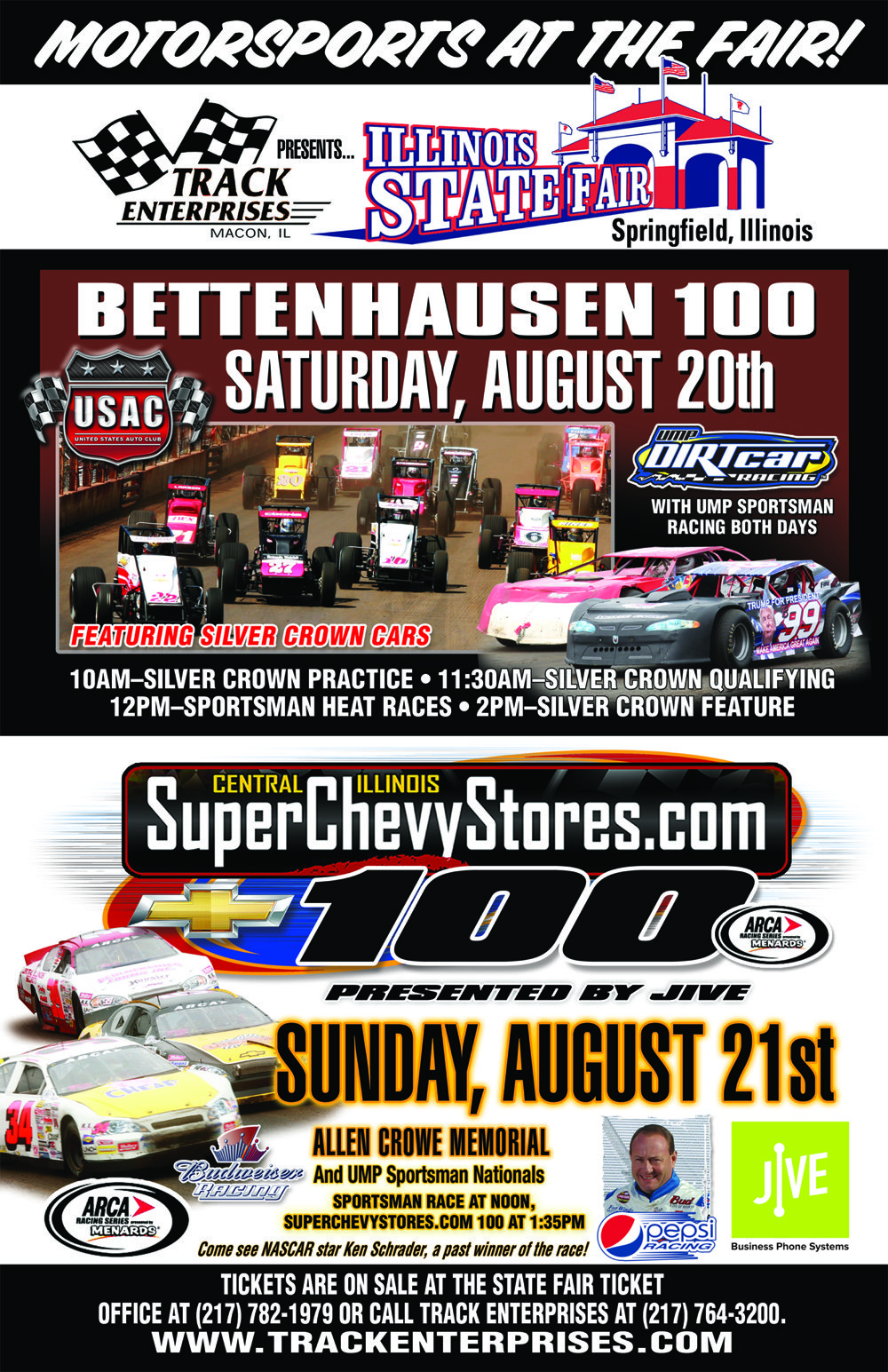 The long running (since 1934) championship car race held on the last Saturday of the Illinois State Fair received its memorial designation in the summer of 1961, not long after the May Indianapolis Motor Speedway practice accident which claimed the life of Tony Bettenhausen.  Bettenhausen, a Tinley Park, Illinois native, was one of the most popular racing drivers in the country and perhaps the best known driver from Illinois.  His aggressive, bolt upright style won over a legion of fans including those in the capitol city who watched him become the first three-time championship race winner in Illinois State Fair history.  Naming the championship race in his honor was the tribute bestowed upon the “Tinley Park Express” by the Illinois State Fair board in 1961.

Sons Gary, Merle and Tony Jr. followed their famous father into auto racing.  Gary, like his father, gained numerous fans for his aggressive racing style winning two USAC Sprint Car titles in 1969 and 1970.  He nearly won the 1972 Indianapolis 500 for Roger Penske, leading 138 laps before mechanical gremlins forced his car out of the event.  He and Penske parted ways in 1974 when Gary flipped his championship dirt car out of the New York State Fairgrounds mile dirt oval seriously damaging an arm and putting his own career in jeopardy.  He came back with a slightly different style with the use of only one good arm and won two USAC Silver Crown championships in the process as well as setting fast time in qualifying for the 1991 Indianapolis 500.  Gary made 18 starts in his father’s race at Springfield winning twice.  A very emotional win came in 1978 and an equally emotional and perhaps grittier win came in 1983 when he led all 100-miles in 100 degree heat.  Gary passed away in 2014 at the age of 72.

Brother Merle was an aspiring racer in his own right running up front in USAC Midget races and joining Gary on the championship trail in 1970.  In fact, his first national championship start was the 1970 Bettenhausen 100 at the Illinois State Fairgrounds.  Merle’s budding career was cut short in an accident during his third championship race at Michigan International Speedway in June of 1972.  Merle’s car hit the outside retaining wall and burst into flames, he sustained burns and the loss of his right arm.  Merle did return to racing briefly and ran midgets with the aid of a prosthetic device.  He later went into business and remained close to the sport.

Tony Jr. began his career in stock cars racing in both the USAC and NASCAR ranks.  He eventually turned his attention to Indianapolis making the 1981 race and nearly winning the Michigan 500 that same year in an old McLaren that had previously been driven by Tom Sneva.  Tony made 11 starts at Indy before turning his attention to ownership and becoming a successful owner in the Championship Auto Racing Teams ranks.  Sadly, Tony and his wife were among the victims in a February 2000 plane crash.

“This is a family that is known all over the world and has given so much to our sport”, said Illinois State Fair race promoter Bob Sargent of Track Enterprises.  “The fair board paid Tony Bettenhausen the ultimate tribute in 1961 when they named the champ car race in his honor.”  “When USAC and I got together over the winter, we decided to take that tribute one step further and I know fans will agree this is a great way honor one of America’s great racing families.”  From this point we will be calling our USAC Silver Crown event, the Bettenhausen 100 in honor of the whole Bettenhausen family.”

The Saturday event is part of a two day race on the last weekend of the Illinois State Fair that features USAC Silver Crown Saturday and the ARCA Racing Series presented by Menards on Sunday.

Sunday, August 21st times are 5:30 AM for registration and pit gates, 8:30 for grandstands and ticket office, 9:00 for practice, ARCA qualifying at 11:15, Sportsman feature at 12:00 noon, an ARCA autograph session at 12:30, and the SuperChevyStores.com 100 presented by Jive Communications take the green at 1:35.

Advance reserved adult tickets can be purchased for either of the days for $25, a discount of $5.  Children 11 and under are $10.  Tickets may be purchased by calling Track Enterprises at 217-764-3200 or by contacting either of the two fairgrounds ticket offices.  Discount tickets for Sunday’s ARCA event can also be purchased at Central Illinois Menards stores.

The host hotel for the State Fair event is the Carpenter Street Hotel.  While the hotel is now totally booked for Saturday night, there are still some rooms available for Friday, August 19th, for those wanting to come in early for Saturday morning’s festivities.