DuQuoin, IL-(August 27, 2016)-This Labor Day weekend marks the 70th birthday for automobile racing on the famed “Magic Mile” at the picturesque DuQuoin State Fairgrounds in southern Illinois.  A hall of fame roster of drivers have seen action on the DuQuoin clay which has produced some of the most famous and infamous moments in American auto racing.

William Hayes, owner of the local Coca-Cola bottling plant envisioned a fair in southern Illinois that rivaled yet complimented the established state fair in Springfield.  He purchased 30 acres land on the south side of the small southern Illinois community and in 1923 launched the first DuQuoin State Fair.  In 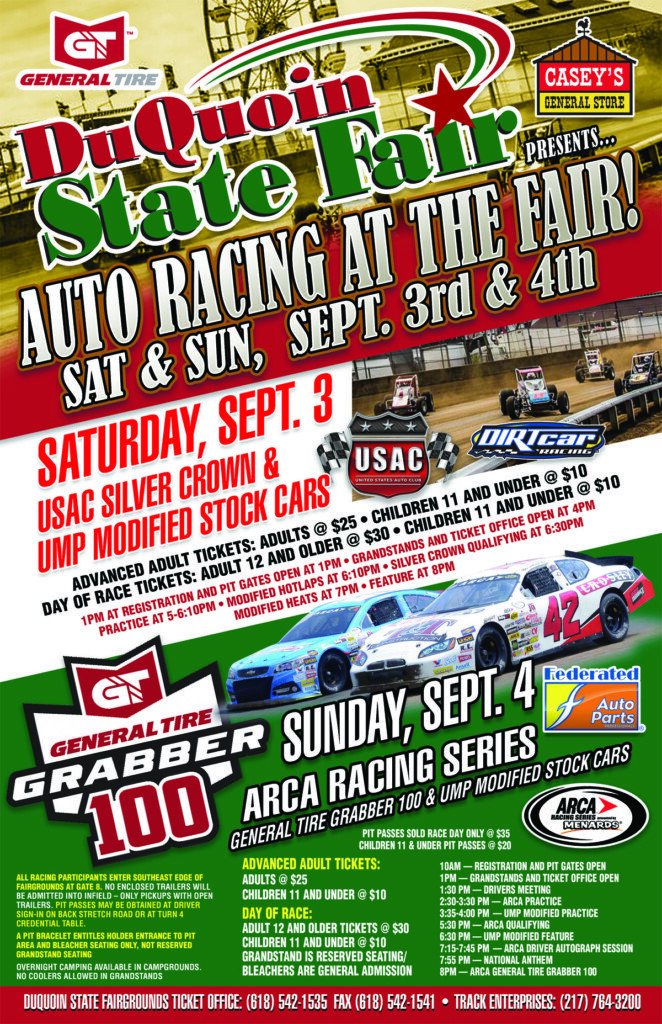 1939 the Hayes group purchased reclaimed strip mine land adjacent to the fair property and increased the size of the fairgrounds to 1200 acres.  The reclaimed mine land helped give the fair its appearance of lakes and camping areas, in addition over 1400 trees were planted as part of the landscaping effort.

Near the end of World War II construction began on a new one mile dual purpose race track to replace the half mile track and small wooden grandstand that were used for horse and auto racing.  The half mile grandstand burned to the ground during the summer of 1945 and as a result the new grandstand had to be rushed to be able to host fairgoers for entertainment that year.  Steel shortages from the war prevented the grandstand from being completed and the ban on auto racing, which had not yet been lifted, prevented cars from taking to the track.

Actually August 31 of this year will mark the exact date that auto racing was first contested on the mile long ribbon of dirt as in 1946 Labor Day fell on September 2 of that year.  Thus, on Saturday August 31, 1946 sprint cars took to the mile before a large crowd in the grandstand which did not yet have the classic roof over the stage area.  CSRA star Jimmy Wilburn won the 25 mile event, two days later Hal Cole took a 10-mile feature on the new track.  Cars returned in 1947 with Wilburn setting a new track record of 36.91 and winning a 25 mile feature in sprint cars on August 30, while Ray Knepper won a 10-mile feature on Labor Day.  Despite the success of the first events Hayes had bigger plans for his facility.

Petitioning for and gaining sanction for a AAA 100-mile national championship race during the winter Hayes scheduled the event for Labor day 1948 and to the surprise of many scheduled a second one in October.  The fair race was won by future Indianapolis 500 winner Lee Wallard while the still date in October turned tragic.  A cool day with a small crowd watched as popular national driving champion Ted Horn flipped in turn 4 early in the event and later passed away at the local hospital.  The accident made national headlines and gave rise to the annual Ted Horn 100 national championship race during the DuQuoin State Fair.

Champ cars and midgets returned in 1949, with stock cars added in 1950.  1950 also marked the first time a DuQuoin championship car race was rained out and not rescheduled.  Over the next five and one half decades auto racing fans by the thousands made the Labor Day weekend pilgrimage to DuQuoin for the motor sports program.  The list of participants in those programs currently fills more than one auto racing hall of fame.  Jimmy Bryan, Fred Lorenzen, A.J. Foyt, Rodger Ward, Jack Bowsher, Don White, Butch Hartman, Al Unser, Mario Andretti, Gary Bettenhausen, Dean Roper, Jack Hewitt and Frank Kimmel are just a few of the names who have visited DuQuoin’s lakeside victory lane.

Pit gates are scheduled to open on Saturday, September 3 at 1:00 PM, with the grandstands at 4:00, hotlaps at 5:00, and racing at 7:00 with Modified heats followed by the Ted Horn 100 presented by Casey’s General Store.  The ARCA Racing Series, presented by Menards comes to town on the following day for the General Tire Grabber 100 presented by Federated Car Care.

Sunday pits will open at 10:00 AM, with grandstands opening at 1:00 PM.  ARCA practice will be on track at 2:30 with Modifieds trackside for hotlaps at 3:35.  Menards pole qualifying presented by Ansell will take place at 5:30 with the Modified feature to follow at 6:30.  The green flag is scheduled to drop on the General Tire Grabber 100 presented by Federated Car Care at 8:00 PM.

Advance discount tickets are available, reserved and general, for $25 each day through the DuQuoin State Fair box office or through the Track Enterprises office.  Tickets for children 11 and under are $10.  Day of race purchases at the gate are $5 more at $30 per person.  The DuQuoin State Fairgrounds ticket office can be reached by calling 618-542-1535, while the Track Enterprises number is 217-764-3200.

For full info on the event, visit www.trackenterprises.com.