This coming Thursday and Friday, July 21 and 22, fans in the midwest will have the opportunity to see plenty of national stars on the short track scene at Lucas Oil Raceway.  Several drivers from the NASCAR ranks will be there, from veterans like Tony Stewart and Ryan Newman, to up and coming competitors like Erik Jones, John Hunter Nemechek, Cody Coughlin, Will Byron, and Ty Majeski.  The two days will be a great start to a racing weekend in the Circle City. 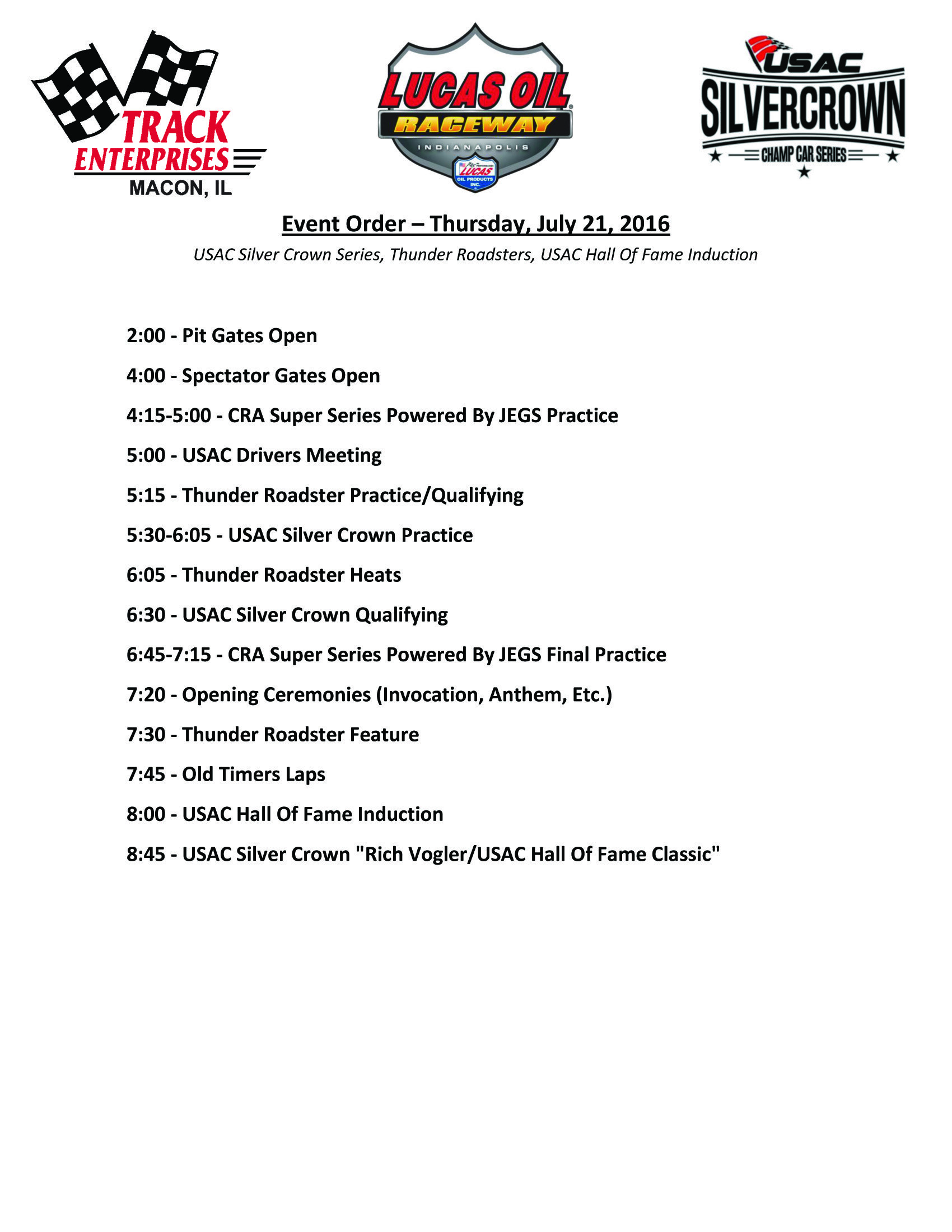 On Thursday, NASCAR veteran Tony Stewart, racing in his final full-time season behind the wheel of a Cup car, is scheduled to be on hand for his USAC Hall Of Fame induction.  11 others will also be inducted in a ceremony which will be held following the Thunder Roadster feature and preceding the USAC Silver Crown Rich Vogler Classic 100.

Another big name that fans will see on Thursday is NASCAR’s Ryan Newman.  The South Bend, IN driver will be behind the wheel of the Bowman-Armstrong Racing #21 in the Rich Vogler Classic 100 competing against a field in upwards of 20 cars.  While Newman will be no slouch, Kingsburg, CA driver Tanner Swanson will be among the favorites to find victory lane.

On Friday night, another barrage of big names will head to the Brownsburg, IN area to race.  On that evening, the ARCA Racing Series presented by Menards and the ARCA/CRA Super Series powered by JEGS will be on track.  Leading Friday night’s list are some of the young drivers, familiar to Super Late Model racing and up and coming in the upper ranks of NASCAR.

Erik Jones, coming off of a second place run at Slinger on Tuesday night, has just announced he will be competing with the ARCA/CRA Super Series in the Circle City 100 presented by CSX Play It Safe.  Jones, the 2015 NASCAR Camping World Truck Series champion and current NASCAR Xfinity Series star, has a great resume in Super Late Model competition, winning the Snowball Derby, Winchester 400, and numerous other big events.

John Hunter Nemechek, quickly rising to the top in his young career will be back to defend his 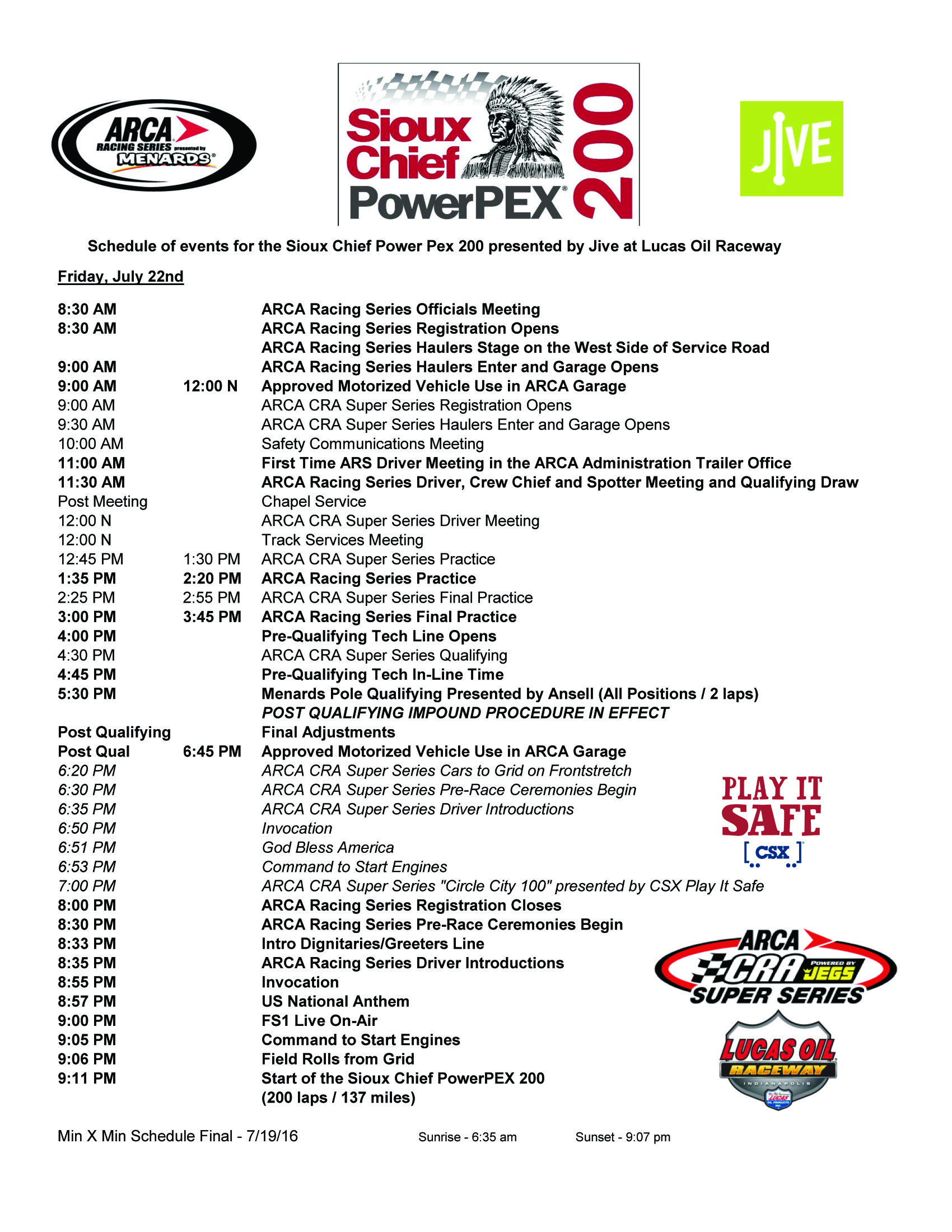 2015 win in the Super Late Model portion of the show.  Nemechek narrowly lost to Kyle Busch in 2014 but came back last year to win from fairly deep in the field after setting fast time.  Nemechek may be the odds on favorite but it will be tough to pick with the caliber of competitors he will be facing.

That said, the ARCA Racing Series will have Mitchell, IN driver Chase Briscoe, who is currently leading the standings and has been the man to beat lately.  Briscoe will be joined in the Sioux Chief PowerPEX 200 presented by Jive by former Indiana youngster J.J. Haley from Winamac.  Both are expected to be tough in the 200 lap affair.

There are a number of ways to purchase tickets for the event.  In addition to purchasing them at the gate each day, discounted general admission tickets are available online at https://usacracing.ticketspice.com/track-enterprises.  General admission tickets are also available at Central Indiana area Menards stores for Friday’s event.  Tickets for either day can also be ordered by phone at 217-764-3200.  And again, tickets will also be available at the gate each day.