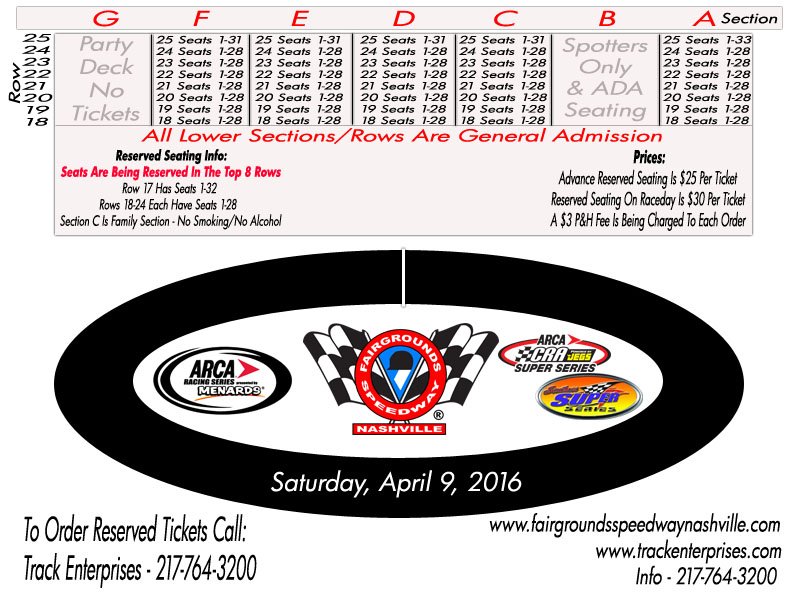 (Nashville, TN – 02/22/16) – Track Enterprises, the racing promotion company based in Macon, IL, has announced that discounted presale tickets are on sale now for the April 9, 2016 ARCA Racing Series event at Fairgrounds Speedway Nashville.  Joining the ARCA Racing Series will be the Southern Super Series and the ARCA/CRA Super Series in a huge combined event.

For the ARCA Racing Series presented by Menards, last year marked the return to the Fairgrounds after a 20+ year hiatus.  The eventual champion, Grant Enfinger, claimed the win which helped propel him to the series championship.  Last year’s date also saw the Southern Super Series Late Models compete in a 100-lap race that saw Daniel Hemric take the checkered in a thrilling battle down the stretch.

Discounted advance reserved tickets for the top eight rows along with general admission passes for the Saturday, April 9 portion of the event are now on sale in the Track Enterprises office.  Pre-sale reserved tickets include a $5 discount per pass.  To order your tickets to this year’s ARCA 200 along with the North-South Super Late Model Challenge, call Track Enterprises at 217-764-3200.

More details on the doubleheader weekend will be announced as the upcoming weeks progress.  For further information, visit www.trackenterprises.com, www.southernsuperseries.com, www.cra-racing.com, or www.fairgroundsspeedwaynashville.com.