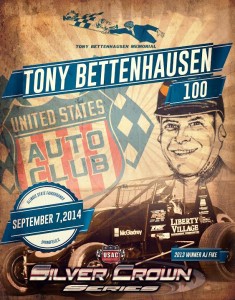 MACON, Ill. – A.J. Fike of Galesburg, Ill., goes for a rare three-peat when the USAC Tony Bettenhausen 100 for Silver Crown cars roars into action on Sunday, Sept. 7, in a complete show on the Springfield Mile at the Illinois State Fairgrounds. The Bettenhausen 100 will include practice, time trials and the 100-lap race after being rescheduled from two weeks ago. Tickets from the original date will be honored on Sept. 7. Combined with a POWRi midget program at Macon Speedway on Sept. 6 with double features in the midget and outlaw micro divisions, it’s an open wheel weekend.

The Tony Bettenhausen 100 is an 80-year-old national championship race filled with tradition, excitement, thrills and color on the Springfield Mile, billed as the world’s fastest mile dirt track. Named after an Indy 500 star from suburban Chicago, the Tony Bettenhausen 100 didn’t have an Illinois driver win it in 29 years before Fike of Galesburg took the checkered flag in 2012. When he won it again last season, Fike could become only the second three-peat winner, joining Chuck Gurney (1989-91). Fike took the lead on lap 92 last season for the third Silver Crown win of his career. It’s hard not to get nostalgic. Before Fike, the last Illinois driver to win the Bettenhausen 100 was the namesake’s son, Gary, who won it in 1978 and 1983. Gary Bettenhausen passed away earlier this year.

“The Silver Crown series is going in a positive direction,’’ said USAC series director Andy Hillenburg. “With race organizer Bob Sargent’s support, we are delighted to be able to retain this marquee event for our fans and participants as we continue to strive for the prominence this series deserves.’’

Fans who attend the Dana Godfrey Memorial for POWRi Lucas Oil Midgets Saturday, Sept. 6 at Macon Speedway may purchase tickets for the Bettenhausen 100 for half price – just $15. Tickets will be available at the Macon Speedway box office. POWRi has scheduled double features in both midgets and outlaw micros. Justin Peck is the polesitter with Christopher Bell also in the front row, followed by Zach Daum and Rico Abreu in the second row in a feature lineup set during the April 26 racing program. Gates open at 5 p.m. with racing at 7.