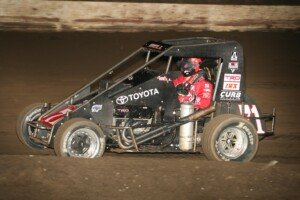 MACON, Ill. – The POWRI Lucas Oil National Midget Series saved the best for last. In the final appearance of the season for the POWRi Lucas Oil National Midget Series and Speedway Motors Outlaw Micros, both divisions will run double features Saturday at Macon Speedway. Originally built as a midget track in 1946, the legendary fifth-mile high banked dirt oval always puts on a great show when the midgets roll onto the track. The fearless POWRi drivers love using every inch of the smooth banking for hair-raising moves that keep the fans on the edge of their seats. With Mother Nature keeping our loyal Macon Speedway fans from watching POWRi take the checkered flag thus far this season, the excitement for these double features already has folks making plans on dropping a blanket on the bleachers early to get a good seat for the action.

Reigning series champion Zach Daum of Pocahontas, Ill., once again leads the standings. Rising stars Christopher Bell, Rico Abreu and Tanner Thorson combined for 13 wins already on the POWRi tour. You might just find The Next Big Thing in auto racing in a POWRi car. NASCAR rookie of the year candidate Kyle Larson won in the POWRi tour last season.

Justin Peck is the polesitter for the POWRi feature lineup set during the April 26 program. The Outlaw Micros will battle with the Beach House Mini-Sprints with a lineup also set on April 26, and a complete racing program for both POWRi series will also be held. Billingsley Towing Modifieds, Street Stocks, Outlaw Hornets and Stock Hornets will also race. Pits open at 3 p.m. with grandstands open at 5 while racing starts at 7.

On DMH Night, all employees of Decatur Memorial Hospital with company ID may purchase general admission tickets for $8.

Fans who attend the Dana Godfrey Memorial at Macon Speedway may also purchase tickets to the USAC Tony Bettenhausen 100 for just $15 – half of the price for tickets sold on race day.  The 100-lapper for USAC Silver Crown cars is Sunday, Sept. 7 at the Illinois State Fairgrounds in Springfield. It was rescheduled from mid-August. The Bettenhausen 100 is an 80-year-old national championship race filled with tradition, excitement, thrills and color on the Springfield Mile, billed as the world’s fastest mile dirt track. Practice is set for 10 a.m. with qualifying held before the race at 1:30 p.m. Grandstands open at 9 a.m.