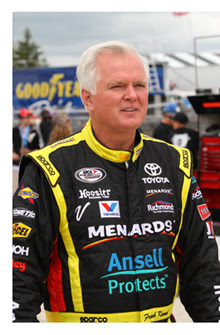 Concord, NC (August 19, 2015) – Frank Kimmel will make his ninth ARCA Racing Series presented by Menards start of the season at the Illinois State Fairgrounds’ Springfield dirt Mile on Sunday, August 23rd. Kimmel, driver of the No.25 Ansell-Menards Toyota, talks about the significance of ARCA running on dirt: “Dirt racing is part of the success of the series and what makes this tour so special,” said Kimmel. “Everyone looks forward to this time of year – the fans, the teams and all the drivers. Year after year the dirt races provide some of the most exciting racing. Look at the history – over 50-years strong. It’s important we stay racing on the dirt.”

Kimmel and his Venturini Motorsports prepared No.25 Ansell-Menards Toyota team are coming off of a third-place finish at Berlin Raceway and looking to continue their mid-summer surge. The No.25 team is tied for a series best with nine top-5 finishes and occupies the second spot in ARCA’s owner championship point standings.

“We’ve got some good momentum going now. The team continues to work hard and put great cars out on the track and it really shows. I’m confident every time I climb in we’ve got good people and fast cars. It’s all about the confidence and our Ansell-Menards team shows up every week,” said Kimmel.

Kimmel Best in Show at Springfield Mile
The annual road trip to Springfield means two things; the first leg of back-to-back dirt races and of course, the State Fair…Illinois Style. And nobody does it better than 10-time ARCA Racing Series national champion Frank Kimmel who is the all-time Springfield winner with eight wins, his most recent in 2012.

The Dynamic Duo – Frank Kimmel & Brandon Jones in Championship Hunt
In 15 races, the duo of Kimmel-Jones, who are splitting the driving duties this season, have combined for nine top-5 and eleven top-10 finishes placing the No.25 Ansell-Menards Toyota second in the ARCA Racing Series Owner Championship points’ standings – just 55 points out of the top spot with five races remaining.

#BulldogStrong
Team Venturini continues to show support for driver Kevin Swindell (Nickname, Bull Dog) who was injured last week in a crash during a qualifying heat race for the Knoxville Nationals in Knoxville, Iowa. VMS team cars will carry the #BulldogStrong mantra as the 26-year old Germantown, TN driver continues his recovery. Swindell, a two-time ARCA/VMS winner, earned his first ARCA career victory in 2012 winning at Chicagoland Speedway. Swindell, who started on the pole and led every single lap, gained an important win for VMS in their 30th Anniversary Season in ARCA competition.

ABOUT ANSELL:
Ansell is a global leader in protection solutions. Headquartered in Iselin, NJ, 11,000 employees across 42 countries design and manufacture innovative products relied on by millions of consumers, workers, first responders and healthcare professionals. The Ansell vision is to create a world where people enjoy optimal protection against the risks to which they are exposed by delivering safety, peace of mind and performance with unmatched quality, comfort and technology. This vision is delivered by the Ansell core brand products, from the HyFlex®, AlphaTec®, TouchNTuff®, ActivArmr®, Projex®, VersaTouch®, Trellchem® and Viking product lines.
ABOUT MENARDS:
With 287 stores in 14 Midwestern states, Menards has the tools, materials and supplies for all your home improvement needs whether just needing a light bulb or can of paint to building a deck or new home. Menards is known throughout the home improvement industry as the low price leader; it’s no wonder their famous slogan – “SAVE BIG MONEY” – is so widely known and easy to remember. Menards does things right – the company’s strength and success can be seen in the well-stocked and maintained stores, the lowest prices in town and the way guests are always treated like family in a hometown hardware store atmosphere.
ABOUT VENTURINI MOTORSPORTS:
Venturini Motorsports (VMS), fielding cars for over 30-years in the ARCA Racing Series presented by Menards, is one of the premier NASCAR driver development programs in the country. Multiple team championships and consistent on-track success, VMS has evolved into one of the most recognizable names in motorsports. Since 2007, VMS has assisted in the career development of notable NASCAR drivers such as Joey Logano, Justin Allgaier, Ryan Blaney, Alex Bowman, Brian Scott, Kevin Swindell, John Wes Townley, Erik Jones, and Justin Boston. Over the years the Venturini name has become synonymous with modern-day racing in America. In 2012, the Venturini family was inducted into the National Italian American Sports Hall of Fame (www.NIASHF.org) and now find themselves enshrined with such sports icons as Joe DiMaggio, Mario Andretti, Vince Lombardi, Tommy Lasorda and Rocky Marciano.
By Adam Mackey|2017-01-09T09:33:45-06:00August 19th, 2015|ARCA, DIRTcar UMP, Illinois State Fairgrounds, News, USAC|Comments Off on Frank Kimmel Takes on Springfield Dirt Mile at Illinois State Fair