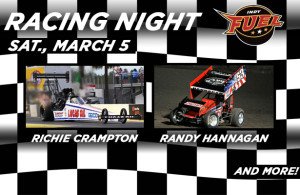 Saturday’s festivities begin at 5 p.m. with a pregame event at Grand Hall, across the street from Indiana Farmers Coliseum. Fans can interact with drivers and cars, take photos and get autographs up until the Fuel and Cyclones face-off at 7:35 p.m. Representatives from Track Enterprises, USAC, and Anderson Speedway will also be in attendance to meet with fans. Admission to the pregame event is free with a game ticket, and food and beverage will also be available for purchase.

Tickets for Racing Night or any other Fuel game are now on sale at Ticketmaster or at the Indiana Farmers Coliseum box office, while a variety of different ticket plans and group specials are available by calling (317) 925-FUEL or visiting IndyFuelHockey.com. As the Fuel approach the home stretch of the 2015-16 season, stay up to date by following the team on Twitter and Instagram (@IndyFuel) and don’t forget to ‘Like’ the Fuel on Facebook.