(NASHVILLE, Tenn. – April 11, 2015) – Grant Enfinger doesn’t play guitar, but he might start. The ARCA Racing Series presented by Menards driver is taking one home with him from Nashville.

“It will be even cooler when I learn how to play it,” Enfinger said in a busy victory lane following the Troop Aid 200 Saturday from Fairgrounds Speedway Nashville. 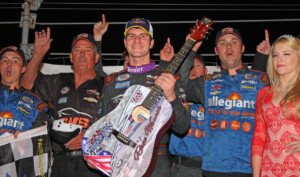 The Fairhope, Ala.-driver started in the back of the field but still led the most laps (90) and won his third consecutive ARCA Racing Series event. He has started the season with three straight wins two years in a row, becoming the first driver in ARCA history to win the first three races of the season in consecutive years.

“It’s been incredible,” Enfinger said. “The good Lord has definitely been looking out for us. We had a part failure, but luckily it was in the last lap of practice. It gave our crew a chance to fix it. We really put them through some adversity today. It was a very, very long day for us, but as soon as the green flag dropped, we had a really great car and the class of the field tonight.”

Enfinger’s No. 23 GMS Racing Chevrolet finished in front of Matt Tifft in the No. 52 Federated Auto Parts Toyota, Austin Wayne Self in the No. 98 AM Technical Solutions Ford and Brandon Jones, driving the No. 25 Ansell-Menards Toyota. Menards Pole Award winner Kyle Weatherman finished fifth in the No. 22 Cunningham Motorsports Ford.

Enfinger had to start at the rear of the field for an unapproved adjustment. He quickly began slicing his way to the front of the Troop Aid 200 lineup, however. Weatherman led the first 71 laps, Self the next seven, and then Enfinger led from laps 79 to 133 before Josh Williams charged to the front.

Williams had stopped for four tires earlier while most of the rest of the lead-lap cars only took on two tires. By the time the final pit stops came, Williams had only two tires to take while Enfinger and others took four. Williams had led 32 laps. Enfinger took the lead on lap 166 from Williams and held off Tifft by 2.054 seconds for the win.

“Our motor started blowing up on lap 125,” Williams said. “The oil pressure started bouncing back and forth. We were losing a cylinder or something. You couldn’t tell it on the old tires, because everyone was so messed up.”

Williams, who finished seventh, said he chose to take four tires first because he felt it was going to be a long green flag run.

“I took the two tires late to try and get track position,” he said. “If we wouldn’t have had the motor issue, it might have been different. The car was really, really good.”

Tifft equaled his 2014 finish at Kentucky Speedway by finishing second.

“With 37 to go it was a little outside the tire range,” Tifft said.  “I had to get around the No. 6 and that cost us a little bit of time. We got with Grant, and maintained about 10 car lengths back, but we were running the same lap times. We were so even. Track position was just so key.”

“We started out struggling with a loose car but we started to figure it out at the end of practice,” Self said. “We took on a couple tires early and that gave us some momentum. We never gave up. We just kept pushing and putting ourselves in good position.”

“I figured we’d have a lot more cautions,” Jones said. “We were on the same tire strategy as everyone else. The car was good. This was my worst finish in ARCA, so I can’t complain about that.”

Sarah Cornett-Ching was 11th when the race ended and Bobby Hamilton Jr. was in 12th.

The ARCA Racing Series was making its first appearance at Fairgrounds Speedway Nashville since the early 1990s and had near-perfect weather conditions for the 200-lap, 119-mile event. The race, which was available on a pay-per-view basis on the arcaracing.com web site, saw three cautions for 34 laps and was over in one hour and 27 minutes.

With the win, Enfinger extended his series point lead and made it two-for-two in the Calypso Lemonade Short Track Challenge. The next race on the 2015 schedule is the Federated Auto Parts 200 from Salem Speedway on Sunday, April 26.