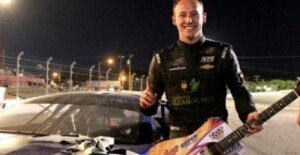 Early in the going it looked like the Southern Super Series event Nashville was going to be a struggle for Hemric and his Carswell Motorsports team. After starting on the outside pole, Hemric quickly faded through the field and slipped out of the top-10 just past the midway point.

But it was all part of a master plan that worked out to perfection for Hemric with the aid of plenty of fireworks up front.

The class of the field for most of the race would be three drivers – John Hunter Nemechek, Donnie Wilson and Augie Grill. All took turns up front as they played a cat-and-mouse game of trying to conserve tires while also running competitive lap times.

The tide turned though with 20 laps to go. Grill, beginning to fade and seeing Nemechek run him down in a hurry for the lead, got stuck behind the Allen Karnes lapped machine. Trying to use the bumper to scoot around Karnes, Grill got Karnes turned around. Nemechek then popped the slowing Grill from behind, sending Grill hard into the wall.

Despite some cosmetic damage to the front end, Nemechek kept going and would maintain the lead on the next restart over a hard charging Kyle Grissom. Grissom would even get in front on one restart before a caution wiped out the lead change.

While all that was happening, Hemric, who had been playing the tire conservation game to a maximum, turned up the wick on his No. 98 and began slicing through the top-10. By the time the field lined up for a restart with 10 to go, it was clear Hemric had the fastest car.

Nemechek seemed to know it too, as he spun the tires on the restart to try to get a good launch and ultimately tangled with Casey Roderick and Grissom. That sent Nemechek and Grissom hard into the turn one wall. Hemric, written off as done at halfway, found himself with the lead with just nine laps to go. Roderick would challenge hard on the restart, but Hemric slowly drove away from the former World Crown and Rattler winner and crossed the start-finish line to earn his first career Nashville guitar trophy.

The win is Hemric’s fifth career triumph in the series and second in the last three races.

“We haven’t run 100 green-flag laps on a set of tires here, so we were just playing it safe,” explained Hemric after playing a few chords on his guitar in victory lane. “So I just went back to old racing experience, from when I’ve gone testing and had to make 120-lap runs. I just ran the pace that made the most sense to run and let everyone else do what they wanted to do. It was hard giving up all those spots not knowing if we’d get the caution or not, but it worked out.”

“Even when we got that caution, I didn’t know if we’d get back. But man, we had so much left in this Carswell Motorsports Chevrolet. It just took off after that last restart.”

Still, Hemric doesn’t know if he could have gotten the win had the leaders ahead of him not mixed up in the action.

[Nemechek] has just been so strong here the last few races. I was hoping the 112 [Grill] would give him some hard racing and apparently they got into trouble. I figured he [Nemechek] would have a lot more left, but he just couldn’t hook up the rear tires. I was fortunate to get by before getting caught up in anything and from there could run my race to the finish.”

Roderick settled for second and continued his reputation for strong showings in high-prestige races. With the aid of championship crew chief Ricky Turner, Roderick set fast time in qualifying and contended in the top-five all night.

“It was just one of those deals where I thought he [Hemric] was better in one set of corners and I was better in another,” explained Roderick. “I know John (Hunter Nemechek) was upset about that last restart, but from my vantage point he just came down on me on that restart. His tires were spinning. I just wanted to make the best move at that point so I went for the spot to his inside.”

Nemechek disagreed strongly with Roderick’s assumption after the race, saying that Roderick had his rear tires “jacked up all the way from start finish to turn one.”

Wilson, who won his first Southern Super Series race at Nashville last season, rebounded from his own late issues to finish third. Casey Smith and Garrett Jones rounded out the top-five.

Next up for the Southern Super Series is a doubleheader at Five Flags Speedway (FL) and Mobile International Speedway (AL) on the weekend of April 24th and 25th.

Replay the Speed51.com Trackside Now coverage from Nashville at this link.