May 23, 2016-Indianapolis, IN-The 62nd Hoosier Hundred Thursday night is shaping up to be one of the most competitive events in recent history, with a number of pilots having a fair shot at first prize.  The legendary USAC Silver Crown Series event on the Indiana State Fair Mile has seen legends such as Foyt, Unser, Andretti, Bettenhausen and Hewitt grace victory lane.  With a pre-entry list that tentatively is well over 30 machines, a number of drivers look to add their name to the Indiana mile history book. 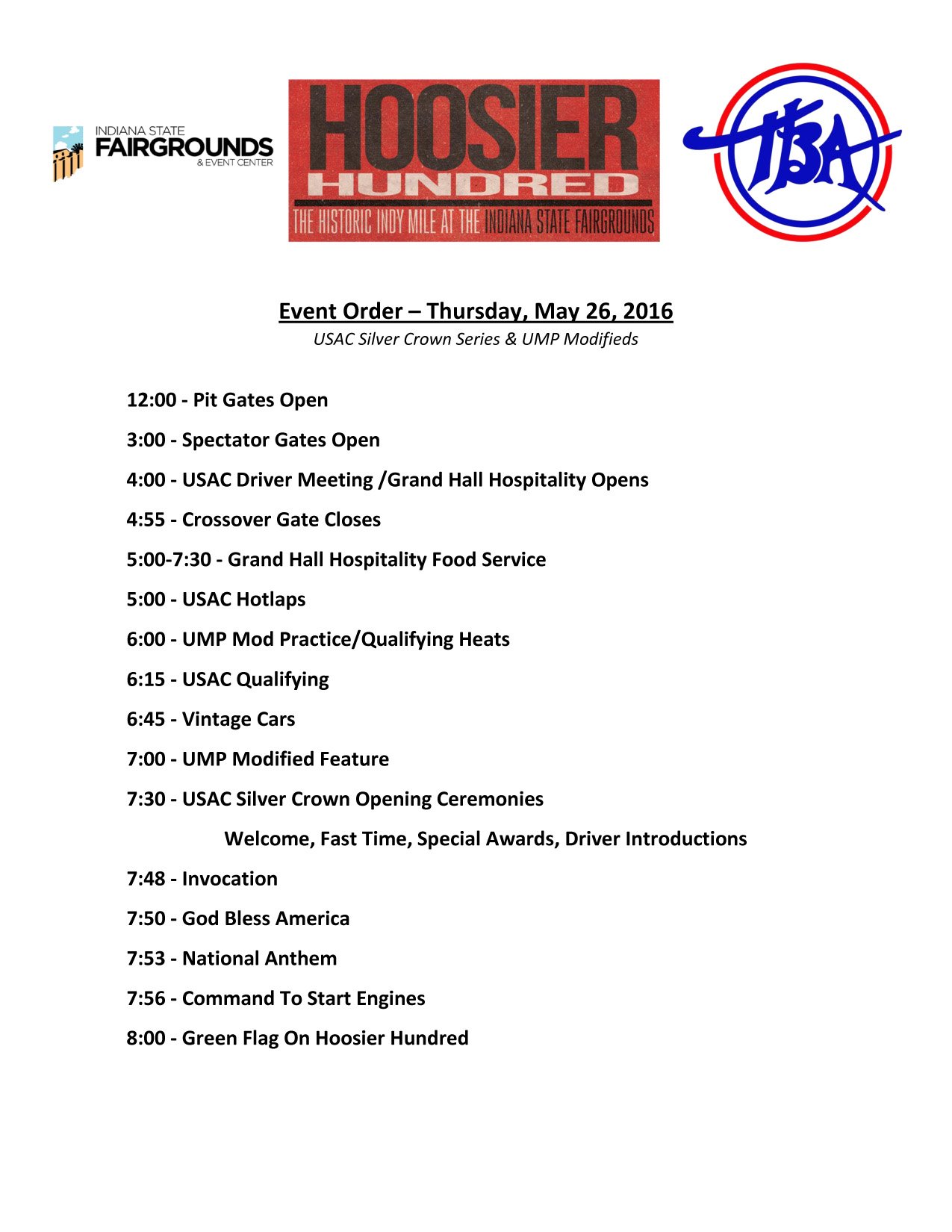 The race is the second this week in USAC’s “The Week Of Indy” series.  It all opens up on Wednesday night with the USAC AMSOIL National Sprint Car Series at the Terre Haute Action Track, followed by the Hoosier Hundred at the Indiana State Fairgrounds on Thursday night, and finishes with the Carb Night Classic “The Race Before The 500” on Friday night at Lucas Oil Raceway.  The Thursday and Friday races are USAC Silver Crown Champ Car events.

Full information on USAC’s “The Week Of Indy” events can be found at www.trackenterprises.com.

This is a look (and by no means all-inclusive) at many of the entrants for Thursday night’s Hoosier Hundred, some of the favorites, contenders, and dark horses to watch.

·        Dave Darland-Lincoln, IN.  Never count out the 1997 Silver Crown champ and the three time (1995, 1996 & 2004) Hoosier Hundred winner.  Darland has six wins on dirt miles between Springfield and Indianapolis, the all-time leader in USAC Sprint Car feature wins shows no signs of slowing down.

·        Jerry Coons, Jr.-Tucson, AZ.  Car owner Gene Nolen got that first win on the Indy mile with Shane Hollinsgworth in 2009 and partnered last year with 2011 & 2012 winner Coons.  The 2008 USAC Silver Crown champ is always a threat on the big tracks and this team is a potent combo.

·        Shane Cockrum, Benton, IL-A new car purchased from the Tony Stewart stable paid dividends for the Hardy Boys racing team propelling the “Chief” to victories at Terre Haute and a repeat at DuQuoin.  Car and driver ran up front at Indy and Springfield as well, the second generation driver loves the big tracks.

·        Bryan Clauson, Noblesville, IN.  Starting in row 10 at the Indianapolis 500 Clauson becomes one of the few drivers in the past 20 years to run at the fairgrounds and the 500-mile race.  Clauson is due in the big cars on one of the big mile tracks and he has a strong race car that can carry him 100 miles.

·        Brian Tyler, Mt. Pleasant, NC.  Four wins at Springfield and one at DuQuoin proved Tyler could win on the dirt miles.  He returned to all three last year with a new car for owner Junior Kurtz but wasn’t able to find past magic.  He teams with Springfield, Illinois owner Dennis McQuinn in a car that can run at the front.

·        C.J. Leary, Greenfield, IN.  His dad won the 1997 Hoosier Hundred and in April he became the first son of a series race winner to also find victory lane.  A strong runner in USAC and Central Indiana sprints don’t be surprised if this driver and car challenge for the lead.

·        Aaron Pierce-Muncie, IN.  Pierce has wins on pavement and is the fastest driver in series history.  Last year he dazzled fans with a podium run at Indianapolis and the show he and Cockrum put on at DuQuoin is still fresh in the minds of fans.  If the car stays together count on him as a contender.

·        Justin Grant-Ione, CA.  Grant was overdue for a ride in the series having proven his talent in sprint cars and midgets.  The ride he got has been very fast as evidenced by a pole at Indy and an up front start at Springfield.  Help from new spotter and former driver Jason McCord should help him through 100 tough laps on the Indy mile.

·        A.J. Fike-Galesburg, IL.  Fike was strong in last year’s race leading until Swanson passed him around the 2/3 mark.  With two wins at Springfield and a stock car win on the mile dirt there to boot Foyt’s namesake knows his way around the Fairground’s dirt.  Look for him to be in contention.

·        Shane Cottle-Kokomo, IN.  Cottle won at DuQuoin in 2007 and was very strong running for Curtis Williams last year.  Williams had a bit of a health issue during the offseason yet expect the team and driver to be around for all 100-miles.

·        Chris Windom-Canton, IL.  The “Bear” has a victory on one of the half-miles in the Big Cars but hasn’t reached victory lane on one of the big tracks yet, despite several very good runs.  The Gormly machine is capable as is the driver.

·        Casey Shuman-Tempe, AZ.  The son of former winner Ron Shuman has very few series starts but when he’s been able to secure a ride he’s shown very well.  He ran in the top three a couple of years ago at Indy as a teammate to Cockrum and took over the Bateman ride in the middle of last year gaining a top ten at both Springfield and DuQuoin.

·        Brady Bacon-Broken Arrow, OK.  What is it about Broken Arrow that produces so many great dirt track drivers?  Bacon is another in a long line and the sprint car champ was fast in the beautiful Martens 48, gaining a tenth at Indy however mechanical gremlins haunted the team on the other big tracks.

·        Russ Gamester-Peru, IN.  Never count Russ out of any 100-mile dirt race.  Experience counts and this veteran and his family operation certainly have that.  Wins at Springfield and DuQuoin make this former USAC Midget champ a threat any time the dirt cars roll onto a mile track.  Gamester would like nothing better than to win on the home turf.