The much anticipated Rockin’ & Racin’ show at Fairgrounds Speedway Nashville is now just days away and the entry lists are filled with talented stars from young to old and amateur to professional.  On the card are the ARCA Racing Series presented by Menards, the CRA Super Series powered by JEGS, and the Southern Super Series presented by Sunoco.  The two-day show also includes a Friday night concert with country music artists, Colt Ford and Trent Tomlinson.   While there will be plenty of drivers to watch, many eyes will be on some young NASCAR stars that are seen competing weekly on national TV. 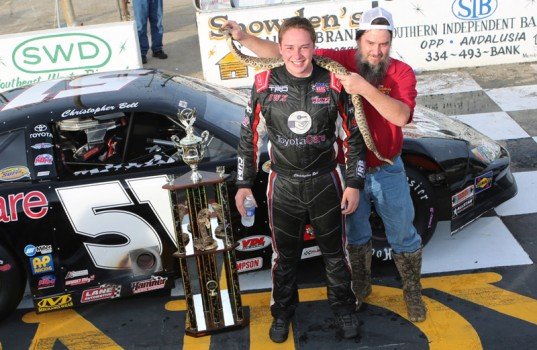 Kyle Busch Motorsports driver, Christopher Bell, from Norman, OK, competes on the NASCAR Camping World Truck Series tour but will be driving the teams Super Late Model in the Music City.  Bell, a young open wheel star with many successes in USAC, POWRi, and other sprint and midget type sanctions has been blazing fast in the truck series this year but hasn’t had good luck on his side to garner top finishes.  Bell is one of the favorites going into this weekend’s Team Construction North-South Super Late Model challenge.

Not to be outdone by their Kyle Busch Motorsports teammate, Cody Coughlin and William Byron are both heading to Nashville as well.  Coughlin, the 2013 JEGS/CRA All-Stars Tour Champion is running a number of NASCAR Camping World Truck Series events as well as big Super Late Model shows this race season.  Byron was the 2015 NASCAR K&N Pro Series North Champion and is coming off of a podium finish in last week’s truck race at Martinsville.  Coughlin will be driving in his family owned JEGS #1, while Bryon will be piloting a KBM Super Late Model.

Steve Wallace, is on the long list of talented drivers trying to claim a guitar this weekend.  Wallace has been running Super Late Models for the last few seasons after running nearly 200 events in the NASCAR Xfinity Series through the 2013 season.  Wallace, a former Snowball Derby champion, spent Monday afternoon at the 5/8-mile dialing in his car for the weekend.

When it comes to locals, there are two that stand out.  Former NASCAR Xfinity Series frontrunner, Bobby Hamilton, Jr. is back behind the wheel of an ARCA Racing Series entry for this weekend’s Music City 200.  Hamilton, from nearby Greenbrier, TN, is looking for a great showing at his home track.  Hamilton is a five time NASCAR Xfinity Series race winner.                Another local favorite, Mason Mingus, from Brentwood, TN, will be competing with the Super Late Model class at Fairgrounds Speedway.  Mingus ran full time in the NASCAR Camping World Truck Series but will be wheeling the family owned Super Late Model this weekend.

John Wes Townley, of Watkinsville, GA, is another driver from the NASCAR Camping World Truck Series that will be making an ARCA start on Saturday night.  Townley has made nearly 100 truck series starts in his career and claimed a win in 2015 at Las Vegas.  Townley also leads the ARCA points after garnering the Daytona win in February.

Rockin’ & Racin’ weekend at Fairgrounds Speedway gets underway this Friday, April 8 with a Super Late Model doubleheader and a Colt Ford and Trent Tomlinson concert.  Each racing series will run points paying events starting at 7:00 with the concert to follow.

Then on Saturday, April 9, the ARCA Racing Series presented by Menards comes to town for the Music City 200.  Saturday’s racing action begins at 5:45 with a combination race between the Southern Super Series and the CRA Super Series based on finishes of the individual races from the night before.  ARCA will take the track at 8:00 for the main event following the Team Construction North-South Super Late Model challenge.

Track Enterprises has discount presale tickets on sale for the event. For event information or to purchase tickets ahead of attending the event, contact Track Enterprises at 217-764-3200 or the track at 651-254-1986 or visit their websites at www.trackenterprises.com or www.faigroundsspeedwaynashville.com.