Nashville, TN ( March 23, 2016) – Track Enterprises of Macon, IL, continues to add more excitement to Rockin’ & Racin’ at Fairgrounds Speedway Nashville.  The two day event, Friday and Saturday, April 8/9, will feature some of the best drivers across the nation in addition to a live Colt Ford concert at the track as part of Friday’s event.  And now, Colt’s opening act has just been signed.

Trent Tomlinson, a national country music recording artist, has been named as the opening act for the Colt Ford concert that will take place on Friday, April 8.  “Drunker Than Me”, “One Wing in the Fire”, and “Just Might Have Her Radio On” are some of Tomlinson’s singles that have been on the US Billboard Top 40 charts.  Tomlinson will perform live in front of the stands at Fairgrounds Speedway around 8:30, shortly after the checkered flag falls on the night’s racing action.

It was announced last week that country star, Colt Ford, would be performing as well on Friday night.  Ford has sold over 1 million albums, millions more song downloads, has 1.5 million Facebook Likes and over 100 million YouTube views.  Ford had his album, “Declaration of Independence” top the Billboard Top Country Albums Chart at #1 in 2014 and is also known for penning “Dirt Road Anthem” and “Country Must Be Country Wide”.

Of course, the concert just adds to an already action packed card full of some of the best racing in the US.  Friday night’s racing will start with qualifying at 5:30 for the ARCA/CRA Super Series 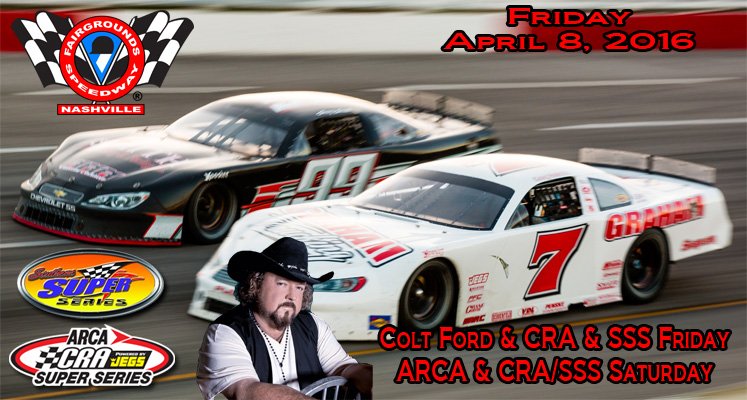 powered by JEGS and the Southern Super Series presented by Sunoco.  The two sanctions feature many of the best Super Late Model drivers across the country.  For CRA, it will be their season opener, while it is leg #2 for SSS as the Rattler was the season opener last weekend.  Racing on Friday night will see point events for both tours, starting at 7:00.  An autograph session will take place between the races and concert.

On Saturday, April 9, the ARCA Racing Series presented by Menards will come to town for the Nashville 200.  It will mark the second year in-a-row in which Track Enterprises has put ARCA back in the Music City.  A full field of veterans mixed with young talent trying to advance their careers to the 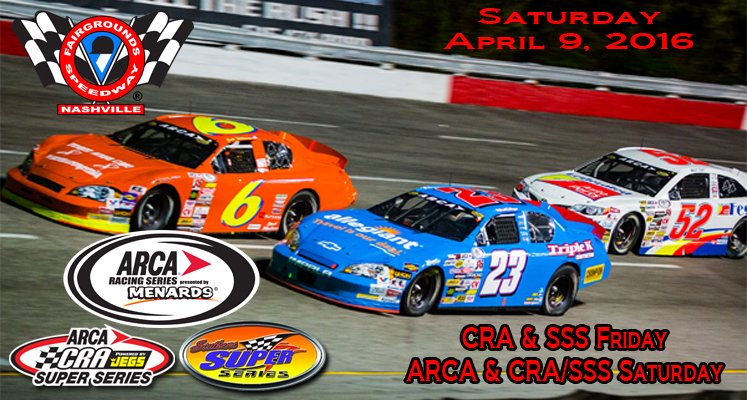 top, should make for another thrilling show.  Adding to Saturday’s show will be the North-South Super Late Model Challenge for CRA and SSS.  The two races from Friday night will determine the starting lineup for Saturday’s huge combined event.

Saturday’s program gets started with ARCA qualifying at 4:15, followed by the North South Super Late Model Challenge at 5:45, and the ARCA Racing Series Presented By Menards Nashville 200 at 8:00.

Track Enterprises is a racing promotion company based in Macon, IL, which oversees Macon Speedway, Lincoln Speedway, Terre Haute Action Track, and hosts a number of ARCA, USAC, UMP, POWRi, WOOLM, and other top events throughout the midwest.  Track Enterprises info can be found online at www.trackenterprises.com or on Facebook at facebook.com/TrackEnterprises.