Du Quoin, Illinois………In a battle of the young lion and the wise veteran, resilience prevailed as Chris Windom of Canton, Illinois fought back to retake the lead from Jeff Swindell with a daring outside turn three pass just three laps from the finish to win his first career USAC Silver Crown Championship race on a dirt mile in Saturday night’s “Ted Horn 100” presented by Casey’s General Stores at the Du Quoin State Fairgrounds. 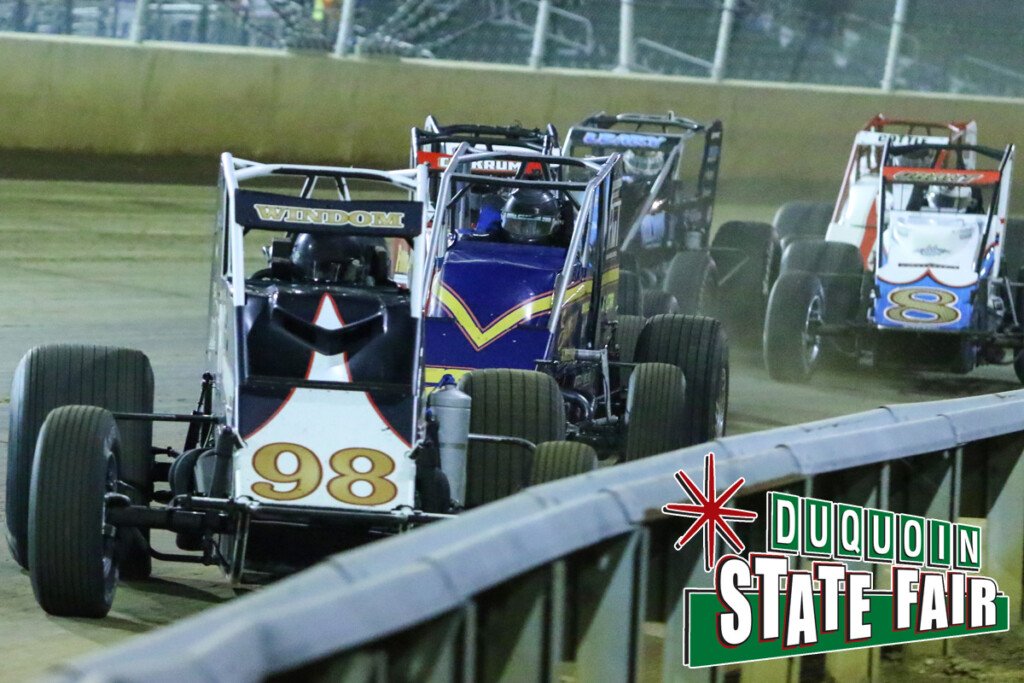 Windom and Swindell’s seesaw battle entertained the sizable southern Illinois crowd throughout much of the 100-miler with Swindell leading 21 laps early in the happening before Windom took his turn at the front for a large chunk of the middle portion of the race.  Swindell charged back to reclaim the point on lap 64 before Windom fought tooth-and-nail in the final laps to work his way back to Swindell as the two exchanged the lead three times in the final four laps.

Windom took control of the race after ripping the lead from Swindell on lap 98 to earn his second series victory of the season – and the fourth of his career – in his RPM-Fred Gormly/RPM Auto Enterprise/Maxim/J & D.

“This is awesome,” Windom exclaimed.  “I don’t know what to say.  I thought we had that one for a while and, obviously, we were all tire managing.  I had a lot left in the tank, but I didn’t know how hard I could pressure (Jeff Swindell) because I knew it was going to be real close on tires.  I let Jeff get back by me; he threw a couple of hard blocks and I tried to get back around him.  I really had to run my butt off.  I’ve been so close to winning at this place so many times.  It’s awesome to be able to come back here with (crew chief) Evan Avart after we lost one (in 2014) and win this one.  This is pretty special.”

Windom rolled off ninth on the grid at the start of the 100-lapper while ProSource Pole winner Kody Swanson lined up alongside Justin Grant at the front.  Swanson quickly sprinted off with the lead into turn one, but it was 1990 Du Quoin winner Jeff Swindell who shot to second on the opening lap from the outside of the second row.

As Swanson enjoyed the edge up front on lap nine, back in the pack, a battle for position between a gaggle of cars on the front straightaway got a bit hairy when Jackie Burke ramped over the right rear of another car at the start/finish line, which sent him airborne before landing on all fours, knocking out the front end as he slid helplessly into turn one.

Simultaneously, the car of Chris Fetter shot straight up the racetrack toward the outside turn one wall.  In Fetter’s path was the stopped car of Burke that was nailed in the tail tank by Fetter who then slammed hard into the wall.  Both drivers were able to walk away uninjured from their broken racecars.

Swindell stuck right with Swanson on the lap 15 restart, then powered around the outside of Swanson between turns one and two to nose ahead.  Swanson clawed his way back to pull even with Swindell as the two raced wheel-to-wheel down the back straightaway into turn three.  Swindell used the middle of the racetrack to glide around Swanson coming out of the fourth turn, then beat him in a sprint to the stripe to grab the lead on the 16th lap with two-time defending race winner Shane Cockrum in tow.

Swindell, looking as effervescent as he ever has behind the wheel of a champ car, immediately began to stretch his lead as the race reached the quarter-point, while Windom began to mount his charge to the front, overtaking Swanson for third and Shane Cockrum for second in quick succession before setting his sights on leader Swindell.

On the 35th circuit, Windom raced his way into Swindell’s shadow after using a big run off of turn four to streak down to the inside of Swindell as the two sped side-by-side past the flagstand toward the first turn.  Swindell put a halt to Windom’s bid for the lead after cutting across the nose of Windom at the entrance of one, forcing Windom to back out and allowing Swindell to momentarily escape with the lead.

Windom refused to be rattled and, just two laps later, the two came upon the lapped car of Danny Long in turn three.  Swindell was forced to check up, allowing Windom to slip underneath Swindell for the lead on lap 37.

As the contest neared the midway point, Windom expanded his advantage to more than a second over Swindell when a yellow for debris erased the interval.  Tires had become a concern for teams with half the race still remaining and, under the caution, forced teams to find ways to stem the tide of wear by rolling through the moisture to cool down the rubber and conserve their tread for the push to the finish.

Just after halfway, Swindell was scraping just to hold onto second by the skin of his teeth with two-time defending series champ Swanson draped all over him for the runner-up spot.  Yet on the lap 61 restart, Swindell found his second wind, trailing by just a single car length as he hounded Swanson every inch of the way around the “Magic Mile.”

On lap 64, Swindell was close enough to reach out and tap Windom on the shoulder as he followed him down the back straight.  Swindell pulled along the inside of Windom as the pair ran side-by-side into turn three, with Swindell beating Windom to the inside guardrail first to re-take the lead with 37 laps to go.

But Windom wouldn’t stray too far from the lead as both he and Swindell separated themselves from the rest of the field.  On lap 69, Windom took another run at Swindell for the lead at the entrance to turn one.  Swindell would have none of that, however, slamming the door on Windom with authority as the two banged wheels which sent Windom sideways, causing him to lose ground to Swindell as he fell back to more than one second behind.

The stoppage of Jacob Wilson’s machine set up a restart with 24 miles remaining that saw Windom unable to get any traction when the green flag flew, allowing Swindell to run away to a one-and-a-half second lead as Windom, Swanson and Shane Cottle battled in close quarters for second.

Cottle’s strong showing came to an end just a handful of laps later when he encountered engine troubles that brought out the yellow, setting up a 15-lap sprint to the finish.

Windom had a more successful restart this time around as he stayed within two car lengths of Swindell as the two entered turn three on lap 86.

One lap later, Windom got a bite off of turn four, drag racing Swindell down the front straight into turn one on the inside where, once again, Swindell closed the lid on the cookie jar, forcing Windom to back out of the throttle to avoid contact.

With less than ten laps to go, Swindell had his first USAC victory since the 1993 “Hoosier Hundred” within his grasp, but Windom was not going to fade away into the distance without putting up a fight.

On the 94th lap, Windom used another big run to poke his nose underneath Swindell entering turn three just as the caution flew for an Aaron Pierce spin, resetting the table for a restart with five laps to go.

With four laps to go, Windom used yet another big run down the back straight to pull even with Swindell, but this time was able to beat Swindell to the bottom of turn three to grab the lead.  Windom then slid up to the middle of the racetrack, allowing Swindell to counter and slip back underneath Windom to regain the lead by the time they both exited turn four.

One lap later, with three to go, Windom pulled a rabbit out of his hat in this high-speed chess match as Swindell entered turn three low to protect the bottom line in anticipation of Windom’s next move.

In an impressive moment of sleight of hand, Windom rode the high line instead, blasting around the outside of Swindell to take the lead for good, securing the top spot and driving away from Swindell during the final couple of laps to take the victory by 1.274 seconds over Swindell, Swanson, Casey Shuman and Cockrum.

Jeff Swindell, the savvy racing veteran from Germantown, Tennessee who was making just his second series start of the season, led the most laps (55) during his two stints at the front of the field, reaching into the distant past to nearly pull off his first USAC win in 23 years in his Swanson Racing/Jet Star – Rosewood Machine & Tool/Maxim/Toyota.

“We came in here tonight and everything went smoothly; we were organized and we did what we needed to do all night,” Swindell explained.  “In hot laps, I sat in the car the whole hour and ten minutes.  We got the car working great.  We got a good start and the Toyota motor ran great until about 25 or 30 (laps) to go when it started sputtering down the straightaways.  As we got off the corner, it just got worse and worse.  I guess that’s how (Windom) got the run on me there because I think we were beating him pretty bad down in (turns) one and two all night.  We came off the corner and it’s popping and farting; that’s when he got the run on me.  I tried to hold him off, but he slid up a little bit and I snuck back by him.  I said ‘this might be ugly;’ we kind of touched earlier going down there into (turn) one.  He kind of surprised me getting under me a little bit as I started in and I saw him get out of the gas and I turned left.  We kind of touched, but hey, that’s what you call good racing!”

“I was really worried about our tires wearing out and trying to keep pace with the top guys,” Swanson admitted.  “When (Swindell and Windom) went there at the end, I tried to go with them.  Tonight, we were third best.  I am so thankful for the car I’m driving.  These guys never give up.  We don’t quit.  We’ll just keep digging and see what we can do at the finale (at Eldora).”